Unbelievable; Photos Of Water Miraculously Dropping From The Status Of Jesus In Anambra 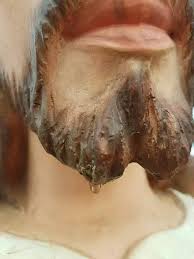 A divine phenomenon is presently taking place in Jesus and Mary Adoration ground Amichi in Anambra State as reported by eye witnesses and some catholic priests. It is revealed that since Ash Wednesday 1st of March 2017 still this day, there has been unending dropping of water from the jaw of the divine mercy statue in the adoration ground.

The water tends to drop when no one is looking. In  the words of an eye-witness. “When you wipe it and stand to see another come out and where it will come out from but nothing will come out. But if you move a little distance away from the status and come back, you would see a drop.

In conclusion it is believe that the water has healing power and some persons are confirming  this belief.