The Magic That Boiling Water Can Do To Your Spoilt Car 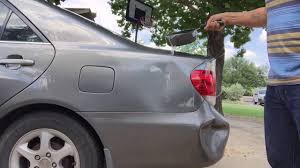 A car accident is an awful ordeal for all parties involved. First of all, it can be really scary, even if it’s just a small collision. You never know what could happen or if the person in the other car is hurt. And then there are the financial consequences…

Besides scary and potentially traumatic, car accidents are also expensive. Getting a considerable dent removed from your car can easily cost you some amount of money. Most people have no idea You come to get a dent removed, but somehow they find all kinds of other issues with your car that need to be resolved and things all starts to add up. That’s not what you asked for… Life’s expensive enough as it is! Luckily, there is a trick that will help you get rid of that ugly dent in your car and it won’t cost you a dime!

It’s very easy to repair a dent by yourself! All you need is a kettle with hot water and a toilet plunger. So, how do you do it? We’ll lets explain

.    As soon as the water is boiling, you take the kettle out to your car and pour the water onto the dent and the surrounding area. Be careful so you don't spill it on yourself.
.    Now it’s time to use the toilet plunger. Put the plunger around the dent and carefully pull it towards you. Slowly and carefully repeat this step a couple of times, making your way towards the dent.
.    After a few minutes of careful work, the dent will be completely gone! It’s just as if there never was any dent in the first place.