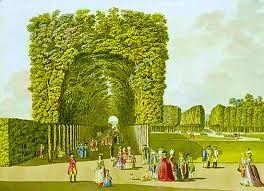 The fruitful age of Queen Elizabeth brought both the planning and the planting of the loveliest English gardens very nearly to perfection. When the other arts of the Renaissance had reached their maturity and were on the verge of decline, garden making began to develop rapidly.

Most of the finest houses in England were built at this period. After their erection an attempt to give them fit surroundings was a natural sequence. All conditions were ripe for the evolution of delightful pleasure gardens, which for form without formality have never been surpassed. Both the art and craft of their construction were understood as certainly never before, and perhaps never afterward.

As an art this garden making was imbued with the creative as well as the imitative spirit of the Renaissance. Men's eyes were opened, as if for the first time, to the charming aspects of life old and new, past and present. A delight in the beauty of nature as well as in that of artistic invention seemed to develop spontaneously. Its practical outcome was the creation of a style of decoration known as that of the early English Renaissance, which was applied to every branch of design, and finally clothed the garden in fanciful array.

Past records, especially of classic Greece and Italy, were searched for information concerning the growth and arrangement of plants and the garden's architectural features. Early in the Renaissance the advice of these classic writers was offered by Thomas Hill and other English authors, apparently on the supposition that it would be followed literally, without considering that the passage of centuries and the difference between Italian and English customs and climate might destroy a part of its usefulness. But the Elizabethan age continued after the death of Elizabeth, and in the seventeenth century the growth of individuality made slavish imitation impossible. Precedent was followed only when suitable, and useless traditions were cast aside. Then systems of horticulture were evolved, adapted to a particular age, climate, and country.