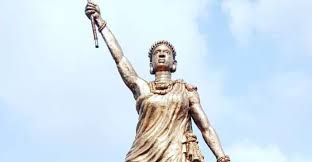 Oloori Moremi Ajasoro, generally referred to as Queen Moremi, was a beautiful and virtuous woman. She was from Offa, but married to Oba (King) Oranmiyan, who ruled Ile Ife in the 12th century. During his reign ‘people of the forest’ terrorised the Yoruba people. They enslaved many Ile Ife (latter Oyo) citizens. The army of the ‘people of forest’ used weird war tactics that made citizens of the Yoruba city-states to live in fear.

To check this, Moremi appeased the river god, Esimirin, to reveal to her the strength of the invading warriors. She vowed to give Esimirin a special gift if her people are saved from their tormentors.

Moremi released herself to be captured and taken as slave by the warriors. For her beauty, the invading King married her and with time revealed the secrets of his army to her.

The King told Moremi that his soldiers mystify themselves as spirits with grasses and bamboo fibres to create fear in their enemies. He added that they do not go near naked fire to avoid being burnt. Armed with this information, Moremi escaped to Ile Ife and revealed the secrets to her people.

On the next attack, the Yoruba army lighted a local touch, which burnt the camouflage of the invading soldiers.To pay her vow to Esimirin after the victory, Moremi offered fowls, kolanuts, sheep bullocks and others, but the deity rejected them, saying it preferred Olurogbo, Moremi’s only son and child. Moremi was troubled for this, but had to give up her only son For her great sacrifice, patriotism and bravery, the Yoruba began the Edi Festival in her honour.