Hilarious Secret we all are Actually Guilty of Having 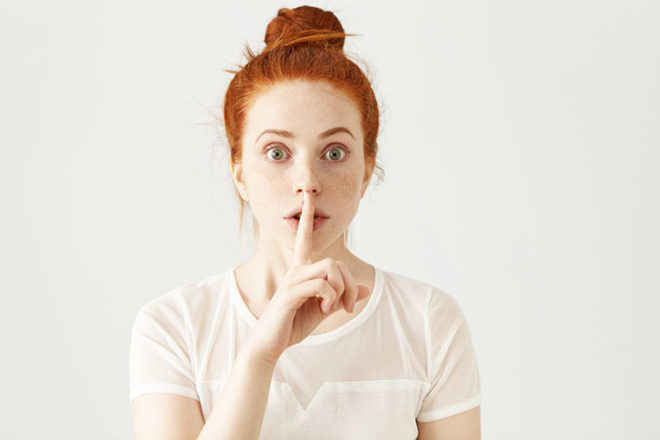 We all are alike in a whole lot of ways. If you think you have a particular habit that in a kind of way seem like your little secret, don’t worry you are not alone because we all have a whole lot in common. Here are some of the things we all do on a down low – and if you think you aren’t guilty of any of them, then you deserve a designated planet for you alone because you aren’t actually human.

You forgot a person’s name immediately after he introduced himself

Can you actually swear with a straight face that you have not forgotten a person’s name few minutes after he introduced himself? Sometimes we get overwhelmed with someone’s presence that we become absent minded during introduction. The person actually told you his name and you told him yours but it got weird all of a sudden that you can’t even remember the name anymore.

This is a common experience; telling a stranger to excuse you so you could reach for a product seems like an awkward situation. So, while you've waited for the person to get out of your way, you've probably spent your time looking and learning about other products in the shelf.

Stumbling and turning it into a funny dance

There is actually no harm in falling, but you don’t want people to see you as a toddler, so you convert your stumbling into a funny dance in order to deceive people. Anyway, you would probably end up deceiving yourself.

If you’ve ever been in this situation before, don’t worry you are not alone. Sometimes we even try to form beat with the sound just to further make people believe it wasn’t a fart.

Bringing a book to the beach and not actually reading it

You actually had every intention of flipping that new best-seller open and getting some reading done while having some beach relaxation. But instead you just took a dozen selfies near the ocean, and then fell asleep.

Lying to the doctor when they ask about your alcoholic consumption

What do doctors actually want us to say when they ask about our alcohol consumption? To tell them we usually drink eight bottles everyday or what?

Anyway, it’s actually not advisable to lie to doctors because these folks are there to help us. We should be sincere with them as possible as we can.

Searching for your phone while holding it in your hand

The average person misplaces his or her phone approximately one million times a day. The situation becomes more pathetic when you use the flash light of the same phone to look for the phone under the bed.

You priced a commodity and ran away

After pricing stuff and they called an outrageous price, in order not to look vulnerable, you told the vendor you would come back for it latter whereas you don’t have the intention showing up anymore.

If you’ve ever priced a pair of shoes when you don’t have the intention of buying it, you are not alone.

Following a song while listening to it over a headphone can be deceiving, it makes you feel like you have a good voice whereas in reality you are totally sounding like a frog.

You found yourself in a situation where you are not understanding anything being said, but you laughed anyway because you found other people laughing.

Nobody wants to look creepy, so we try to find the perfect ratio between making eye contact and looking away. While you are trapped in such dilemma, you start over-thinking it, and you spend so much time in your head like; ("Am I staring at her too hard? I should look away casually, and then look back, maybe after three seconds, or is that too long?") After the plenty discussion in your head, you end up not hearing a word they're saying.

We have never been prayerful compared to the moment when we were walking alone in a lonely street then we farted suddenly! We could pray all the prayers of our life just to make sure that someone did not pass at that moment.

Did you actually go to read or what the hell did you you there for?

Not like we don’t have food at home to eat or something, but this situation just hurt so much.

You were served food as a visitor but you didn’t finish the food because you don’t want to be seen as a glutton.

What’s with visitors and not eating half of their food even when they know that they are damn hungry? Can someone please explain that?

Eavesdropping on other people’s conversation

Eavesdropping isn't exactly polite, but if people didn't want you to listen on their conversations, why do they have such interesting ones in public and expect you not to eavesdrop?

You were in a restaurant or maybe sitting in a park, and then some couples beside you were really having a hot conversation. But you acted like you were pressing your phone and not exactly listening to them whereas you’re actually forming a text book in your head on their discussion.

You constantly act movies in your head

Now that we’ve come to the end of our discussion, how many of these are you really guilty of? Let’s hear in the comment section below.