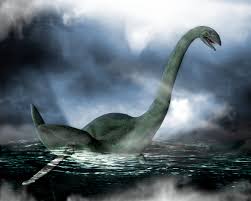 No one can deny the fact that our world is a place full of mysteries. There are lots of unexplained things and phenomenons going on in our sphere that humankind are yet to wrap their heads around. These enigmas have always been fascinating to the extent that scientist, geographers, explorers and even archeologist, finds it difficult studying and presenting an accurate result about them.

Tucked away in a large, deep, freshwater lake, found in the Scottish Highlands, is a strange creature called the "Loch Ness Monster" also called "Nessie". The existence of this creature has been a mystery right from the 6th century around 565 AD when it was first talked about. Nessie is often discussed as a very large creature with a long neck with one or more humps protruding from the water. Popular interest and belief in the creature have varied since gaining worldwide attention in 1933. Evidence of its existence is somewhat nebulous and anecdotal, with a few photographs of the creature fueling lots of controversy. The scientific community however, regard the Loch Ness Monster as phenomenon that lacks the light of biological evidence, explaining sightings of it as hoaxes and wishful thinking. But however some people still believes that the creature is real an not some mythological phenomenons like the gorgon medusa.

What studies have been made about Nessie so far?

There are quite a lot of studies made so far about this monster but we are just going to look at a few of them.

After much controversy about Nessie, the Loch Ness Monster, Edward Mountain financed a twenty men expedition in 1934. They took binoculars and cameras and position themselves around Loch from every 9am to 6pm. The activity they did for five weeks beginning on July 13 1934. They filmed and took 21 photographs but non was considered conclusive.

This society was formed in 1962 in the UK. Its main activity was to encourage groups of self-funded volunteers to watch the loch from vantage points with film cameras with telescopic lenses. From 1965 to 1972 it had a caravan camp and viewing platform at Achnahannet, and sent observers to other locations up and down the loch. According to the bureau's 1969 annual report it had 1,030 members, of whom 588 were from the UK. Before this society was disbanded in 1972, so many volunteers have made several studies under them in an attempt to discover the monster. Some people after their study would claim that the monster is a reptile, others thought it was an elephant who went for bath in the lake and later became a mysterious sea monster. While other studies claimed that Nessie was a Earless Seal. But none of this researchers could prove Nessie's real existence before the Loch Ness Investigation Bureau was disbanded.

An international team consisting of researchers from the universities of Otago, Copenhagen, Hull and the Highlands and Islands, did a DNA survey of Loch Ness in June 2018, looking for unusual species -the results were published in 2019. The result shows that there were no DNA of large fish such as sharks, sturgeons and catfish as many thought there would be. There were neither otter nor seal DNA, but lots of eel DNA was found. The leader of the study, Prof Neil Gemmell of the University of Otago, said he could not rule out the possibility of eels of extreme size, however, none were found, nor were ever caught. The large amount of eel DNA found actually come from many small species of eels and no evidence of any reptilian sequences were found, he added, "so I think we can be fairly sure that there is probably not a giant scaly reptile swimming around in Loch Ness", the Professor added.

The most recent study

In 2019 scientists claim to have finally found a “plausible theory” that support the sightings of the Loch Ness Monster. They claimed that Nessie is not an aquatic reptile left over from the Jurassic era as many people believes or an elephant that got in the water to bathe with her trunk aloft, according to some legends. If Nessie ever existed at all, she was most likely to be a giant eel the researchers said.

However, according to the research, the scientists who made this claims aren't really sure if their results were accurate. So it will be better if only we accept their result with a pinch of salt and regard the issue of Loch Ness Monster a myth or an unresolved puzzle.

Right now what are we to believe about Nessie?

What we are to believe is very simple. Since no one have been able to give a precise account as to whether this creature is real or not -right from when it was first discussed in the 6th century, it will be probably best if we declared Nessie a creature who have no real existence but just a myth.

If Nessie is actually a myth and not real, why then does eyewitness about it still persist?.