Intriguing Self Surgeries That Made History 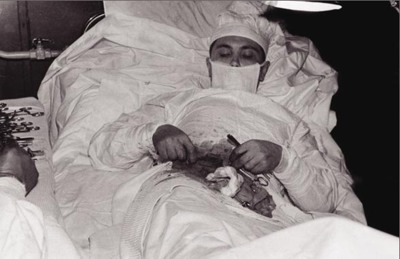 Going under the knife is something terrifying to anyone under any circumstances. It is the most feared medical procedure that no one would love to experience if they had the chance. Different people have undergone different surgeries and non of them is actually given a good account of such an experience.

Self surgery is an act of performing surgical procedures on oneself. It is often rare for anyone to perform such an act and is actually a practice that is not advised for anyone to carry out due to lots of dangers involved. But most people in a kind of way have gone extra miles to be their own surgeon not minding the limitations and the risk involved.

This list contains account of people who have performed surgeries on themselves not because they loved all things adventurous but because they were faced with situations they had no choice but to perform such an act.

Dr. Jerri Lin Nielsen was born in Salem, Ohio, 1952. She was an American physician who had lots of experience in the emergency room. It is said that in 1998, Dr Jerri was employed at the Amundsen-Scott South Pole Station in Antarctica, where she was to be the only doctor during the winter. During the first quarter of the following year around the period or march 1999, she noticed a lump of tissues in her right breast which could signify the onset of tumor. Being far from home and the only doctor in that station, she teleconferenced with medical personnel in the US, and had to perform biopsy on herself. A surgical operation that involves the removal of tissues in order to determine a disease. Although there were lots of limitations she encountered in the process but the operation was really successful at the end.

Amanda Feilding is a British artist and scientific director born in 1943. In 1998 she founded a charitable trust which initiates, directs and supports neuroscience and clinical research into the effects of psychoactive substances on the brain and cognitive function. In 1970, she performed a medical surgery on herself called "trepanation". Trepanation is an ancient medieval practice that involves drilling a hole into the skull in order to improve blood circulation in the brain. The reason why the ancient people adopted this medical practice was because they thought it helps treat several ailments and improve the brain function.

During the course of the operation, she used a dentist’s electric drill operated by a foot pedal and a scalpel to drill a hole into her skull. This is a very gruesome and a dangerous operation for anyone to undergo but however, the surgery does went well for Amanda.

Leonid Ivanovich Rogozov was a soviet general practitioner who took part in the sixth USSR Antarctic Expedition in 1960–1961. He had his post at the Novolazarevskaya Station where he happened to be the only doctor in that place. While on the station, he suffered an acute appendicitis that required and urgent removal. But being the only physician in the station who is quite familiar with such an operation, he had no choice but to perform on himself what he does to patients.

With other people around who knew nothing about surgery but were able to hold equipment, he sat in a reclined position and dagger out his own appendix under local anesthesia. It was said that he passed out during the operation, but was able to continue and complete the procedure after few short hours.

Aron Lee Ralston is an American outdoors-man, mechanical engineer, and a motivational speaker. He was also an alpanist who love all things climbing. In 2002 while he was on a mountaineering trip in Bluejohn Canyon southeastern Utah, he dislodged a boulder that pinned his right wrist to the side of the canyon wall. The grip was so tight that he couldn't get free easily. He spent five days still hooked in the trap without food and water until he finally got an inspiration which turned out to be the best option for him to free himself. This time the best thing he felt was necessary was to let go of the hand since it was already a dead one. He brought out a pocket knife with a dull blade and cut off the soft tissues around his wrist, completely amputating his wrist just to be set free.

Ines Pérez Ramirez lives in a very small village called Rio Talea In Mexico. Despite not having any medical experience or whatsoever, she was still able to deliver herself a baby but this time in the most outrageous way ever. She conducted a cesarean section on herself without any assistance. But before trying anything adventurous, she first assumed a birthing position in an attempt to have a vagina delivery. After long hours of labor, the baby could not be expelled and the only option left for her was to operate on herself.

She drank some cups of hard liquor and then grabbed a 15-cm knife and began to cut through her belly. She cut across several layers of fat, muscles, and tissues until finally reaching the uterus where the baby was lying in an anterior position. However, she passed out for an hour after the operation but was able to regain consciousness soon enough before anyone could help.

Self cesarean section have been documented in the past but most of them have been reported unsuccessful. However, five cases have been proved to be successful so far including the case of Ines Perez.