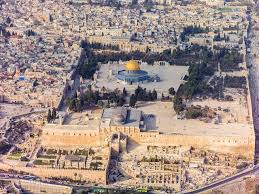 Jerusalem, so rich in history, is a beloved and tragic city. It is the home to three of the major religions- Islam, Judaism, and Christianity. It is one of the most mysterious cities in the world, and there have been many interesting legends and myths about the place. Let us explore more in this ever-controversial city.
Jesus' Entombment's location
There have been many accounts regarding the location of the entombment of Christ, but everybody agreed that the internment was done in a new place originally intended for another person. The most common belief is that the location was the beautiful Church of the Holy Sepulcher, in Jerusalem's old city. The second alleged location is the garden tomb located just outside the Old City's walls near the Damascus gate. The final alleged location called the Talpiot Tomb, located in the east Jerusalem is a bit controversial since it is based on an inscription that says, "Jesus, son of Joseph."
The mystery surrounding the dead scrolls
Some of the manuscripts known to mankind, the dead scrolls, dating back to the fourth century BCE, were discovered in caves near the dead sea. One theory states that in the Jewish-Roman wars, these scrolls were carried out from the Jerusalem libraries by fleeing Jews. Another theory states that these scrolls were written by the banished Jewish Priests called the Sadducees.
Zedekiah's Cave
This cave, under the northern walls of the Old City of Jerusalem, was hidden for 300 years until 1854, when a missionary's dog dug deep in the wall and disappeared through the opening. According to the legends, during a Babylonian siege in 422 BCE, King Zedekiah tried to flee Jerusalem through it but failed. In 1968, a man claimed his grandfather; an east Jerusalem person had buried three cases of gold in the cave. He even promised the government some share of it if they would finance a dig. There was nothing.
Treasures of the Jewish Second temple
One central mystery that has haunted the world is: are the feeble treasures, know as the lost treasures of God of the Jewish second temple still in existence? If so, where are they now? Some say it is in Europe dating back to 70 AD when the Roman ruler Titus was victorious over the Jews. They were able to salvage some of the treasure from the temple to commemorate his victory before it was burned. Some say it is still buried in the grounds of Jerusalem. The hunt for the treasures of god is still on.
King Hezekiah's tunnel
In 1838, an American explorer, Dr. Robinson Edward discovered an ancient tunnel beneath the streets of Jerusalem. Incredibly it runs through 1700 feet of bedrock matching perfectly to the description of King Hezekiah tunnel in the bible. Water still flows through it and is used by the women for laundry purpose. The archaeologists still wonder how anyone in that age was capable of such excavation. The tunnel it seemed was built from both ends simultaneously. A geological study shows that a lot of the channels were formed by natural forces tens of thousands of years ago and not everything was done by man.