What Happens in the Brain During Sleep? 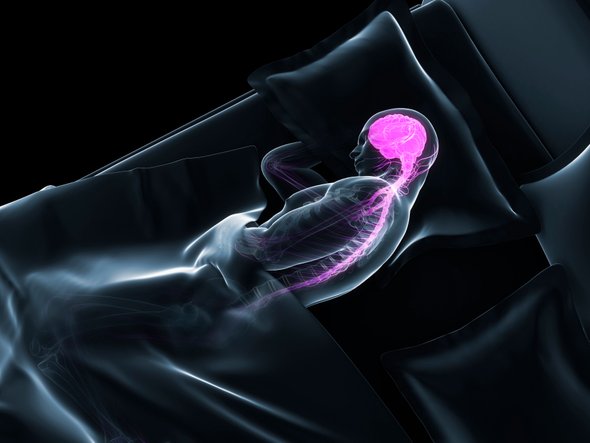 The Scientific explanation of sleep has been a mystery to scientists over the years, but modern research is providing new clues about what it does for both the mind and body. Sleep serves to reenergize the body's system, clear waste from the brain, and support learning and memory. It plays vital roles in improving depression, regulating mood, appetite and libido.

Sleeping is a vital part of our life, and as research have shown us, it is incredibly complex. The brain generates two distinct types of sleep—slow-wave sleep (SWS), known as deep sleep, and rapid eye movement (REM), also called dreaming sleep. Most of the sleeping we do is of the SWS variety, characterized by large, slow brain waves, relaxed muscles and slow, deep breathing, which may help the brain and body to recover after a long day.

When we fall asleep, the brain does not just go offline, as implied by the common phrase “out like a light.” Instead a series of highly orchestrated events puts the brain to sleep in stages. Technically sleep starts in the brain areas that produce SWS. Scientists now have concrete evidence that two groups of cells—the ventrolateral preoptic nucleus in the hypothalamus and the parafacial zone in the brain stem—are involved in prompting SWS. When these cells switch on, it triggers a loss of consciousness.

After SWS, REM sleep begins. This mode is mysterious: a dreamer's brain becomes highly active while the body's muscles are paralyzed, and breathing and heart rate become erratic. The purpose of REM sleep remains a biological mystery, despite our growing understanding of its biochemistry and neurobiology.

We do know that a small group of cells in the brain stem, called the subcoeruleus nucleus, controls REM sleep. When these cells become injured or diseased, people do not experience the muscle paralysis associated with REM sleep, which can lead to REM sleep behavior disorder—a serious condition in which the afflicted violently act out their dreams.