What Is The World's Most Peaceful Religion? 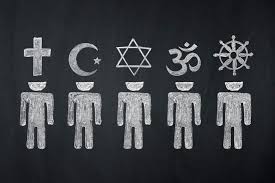 Following multiple instances of Islamic extremist terrorism, non-violent Muslims around the world began a movement to label Islam, “a religion of peace”. Many say that distinct segments of the Muslim population advocate violence, but that at its core, Islam encompasses peace and pacifism. Still, although peace is preached in every religion, the manifestation of belief can sometimes be non-peaceful and oppressive. So, what are the world's most peaceful religions?
Well, most of the world's religious population falls into one of two categories: Western Abrahamic religions, and Eastern Dharmic religions. Problematically, some scholars argue that all three major Western religions: Christianity, Islam, and Judaism, are inherently violent. As they are all monotheistic and exclusive, nonbelievers are directly and implicitly considered at odds with religious doctrine. Despite preaching peace, numerous acts of violence have been committed in the name of God, Allah, and Yahweh throughout history. That leaves the Dharmic faiths. These are predominantly Eastern religions such as Hinduism, Sikhism, Buddhism, and Jain•ism. Hinduism has long been identified as non-violent, largely due to the influence of the pacifist Mahatma Gandhi. However, even within the religion, violence may be used to protect oneself or one's country. One Hindu god states that violence is necessary in the defense of justice, and does not conflict with a spiritual life. And even Gandhi himself was killed by a fellow Hindu.
A similar view is found in Sikhism. Violence is permitted when absolutely necessary; and historically, Sikhs have been oppressed, forcing them to fight back. After years of such oppression in India, Sikhs began wearing a small knife called a “ker-paan.” It is one of five mandatory articles of faith and is symbolically carried to defend themselves and others. But while Sikhs may have good reason to be occasionally violent, it doesn't help make their case for being peaceful. Buddhism has always been pointed to as one of the world's most peaceful religions. In order to fulfill one of their three most important tenets, Buddhists cannot harm any sentient living thing. Historical Buddhist texts actively condemn violence, and the Buddha himself even states that soldiers who die in a “killing mindset” will have an unpleasant reincarnation. However, in practice, Buddhists have not always preferred nonviolence. In Myanmar, a predominantly Buddhist population has been violently oppressing a stateless, Rohingya Muslim minority. Acts of violence by Buddhists are frequently based on political or cultural differences, and not specifically religion. This leaves Jainism.
Although Jainism  is not as popular as the other religions mentioned, there are roughly four and a half million Jains , almost exclusively living in India. Jainism advocates nonviolence and pacifism as a fundamental ethical principle. All violence is viewed as a form of self-injury, as it prevents one from reaching spiritual liberation. And unlike other religions, Jains believe nonviolence applies not only to people, but animals, plants, and even microorganisms. As a result, practitioners are strictly vegetarian, they walk in a way so as to avoid stepping on insects, and they'll even refuse to filter water to keep any bacteria in it alive. These 7 religions are among the largest, but there are estimated thousands of smaller, newer movements with their own distinct views. Of the main religions, however, Jainism prioritizes peace and nonviolence more so than any other. The Sikhs may not be the most peaceful, but they're definitely among the most interesting.
Leave a comment...