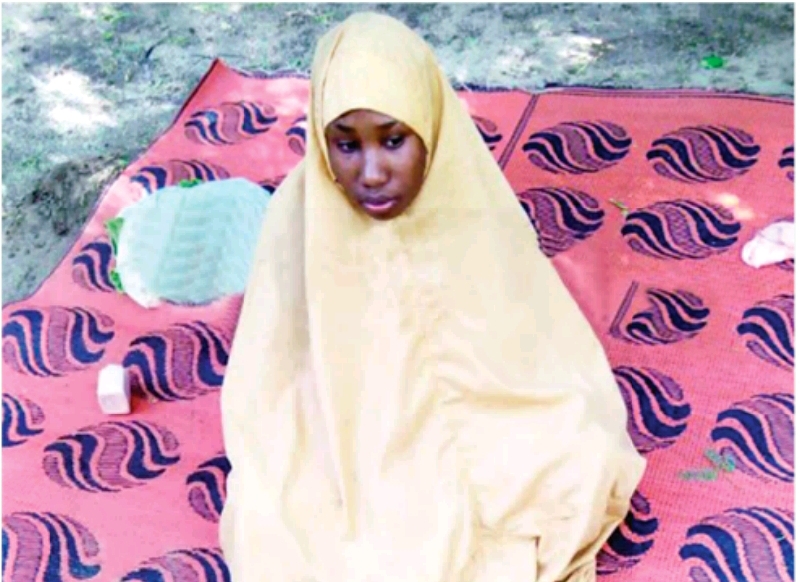 Remember Leah? The Christian girl that was amongst the 110 abducted girls from Dapchi, Nothern Nigeria, about 7 months ago by the Boko Haram sect. It was reported that 104 girls were released, 5 died during the abduction, and poor Leah was retained. Her only offence is that she is a Christian, and has refused to denounce her faith and convert to Islam.
This has been a case very close to our hearts and minds, not just as Christians, but as humans. It is a pity that a young girl has been snatched from the warmth of her family and friends for so long, it's even worse that the government's alleged efforts are not yielding positive results.
On August 27, an audio recording surfaced, allegedly of Leah, pleading with the government, especially the president, his Excellency, Muhammadu Buhari, to please do all he can to free her and allow her continue her education. The 35 seconds recording features Leah pleading in Hausa:
“I am Leah Sharibu, the girl that was abducted from Government Girls Science Technical College, Dapchi. I am calling on the government and people of goodwill to get me out of this problem. I also plead with the members of the public to help my mother, my father, my younger brother and relatives. Kindly help me out of my predicament. I am begging you to treat me with compassion, I am calling on the government, particularly the president, to pity me and get me out of this serious situation. Thank you.”
The audio recording was accompanied with a picture of Leah, wearing a light brown hijab and sitting on a mat, but it was enough to create buzz among the citizens of Nigeria. The question that seems to be on everyone's mind is “What is the government doing, or is this just a ploy to keep hope alive?” People are concerned and want to know what the federal government is doing to make sure Leah Sharibu regains her freedom and is brought home safely.
Although, a government spokesperson issued a statement that the audio is been analysed by the Department of State Services for authenticity, before any action can be carried out. “We are aware of the audio in circulation concerning the unfortunate situation of our daughter, Leah Sharibu. In dealing with terrorists, nothing is too trivial. The secret service is analysing the voice. Our reaction will follow the outcome of the investigation.”
Permit me to ask, with what is the audio been analysed with? Do they have a previous recording of her voice they can compare with?
Leah's Father, Mr. Nathan Sharibu, has indeed confirmed the voice to be that of his beloved daughter, and has called on the government to use this proof of life, to intensify their efforts in the release of his daughter. In his words:
“Nothing is being done that I know of. I don't know of any plan to release her. What I know is what I get from the media. I believe they can get her from Boko Haram if they want to help us. We are very, very sad in the family. It has been seven months since she was taken. We appeal to the federal government to intensify efforts to release our girl for us, we appeal to the whole nation to mount pressure on them to release her for us. We don't know what to do, and we are pained about her captivity.”
The promises and resources the Federal Government claimed to have put in place for her release, has proved abortive. Poor Leah still remains with her captors. Perhaps, the life of one person doesn't mean much to the government? While there has been speculations on whether Leah is still alive or is been used as a bargaining chip with the government, no one is certain. But the family is hopeful, Nigerians are hopeful.
Sept 17, 2018 in a gruesome video seen by an online newspaper, The Cable, Boko Haram executed Saifura Khorsa, a midwife with the International Committee of Red cross. Khorsa was kidnapped in March, 2018 alongside two other victims. The sect has threatened to kill the remaining two victims and Leah Sharibu if the government still refuses to meet their demands.
“We contacted the government through writing and also sent audio messages but the government has ignored us. So, here is a message of blood,” said a spokesman of the group who did not give his name.
“The other nurse and midwife will be executed in a similar manner in one month, including Leah Sharibu,” the sect threatened.
Just like many others before Leah that has been in a situation where the government failed them, we are appealing to the government not to fail Leah and the remaining captives. Leah Sharibu is symbolic of the peril of many Nigerians, that are trapped in the ‘prison' of a system designed to fail them.
#RememberLeahSharibu
Leave a comment...