All Pregnant Mothers Should Beware of These 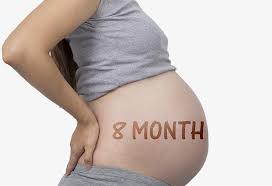 Pregnancy brings a lot of changes to a woman's body both physically, emotionally and physiologically. It makes a woman acquire characteristics she didn't naturally posses. This is such a big deal holding to the fact that you have another human growing inside of you--so do not be surprise at the creepy changes pregnancy can bring to your body. However, while most of these changes can be temporal, pregnancy can also impact some permanent changes to your body as well and if you are not careful, it may leave you quite in a state you will naturally not prefer.

Below are some of the changes that pregnancy can bring to your body during gestation period or postnatal.

As the baby go through the birth canal during child birth, this can bring slight changes to the pelvic bone structures, making the woman develop wider hips which can be a permanent condition if not well controlled. No wounder most women always complain about their jean or skirts not fitting into them anymore after giving birth even when there are notable weight gain.

Women tend to have bigger feet when they get pregnant, which is actually one of the normal symptoms that defines pregnancy. But studies have shown that this condition can be persistence even after child birth.

Normally your breasts increase in size during pregnancy, this may be as result of the overall weight gain that accompany your status or simply because hormones are at work triggering the production of milk in readiness for a nursing mother. Studies have shown that in some women, breast can remain larger in size regardless or whether they've breastfeed or not.

After weaning their infant, most women have their breast returned to the original size while many end up with smaller breasts than they had before pregnancy. This may be as a result of loss of excess fat under the skin which can make the breast look droopy.

It is a normal thing that mothers would urinate more often during pregnancy and postnatal periods but this is a condition that should be normalized with time. However, study have shown that most women face a long lasting problem controlling pee even after weaning their infants and this may actually be a critical problem for many to cope with. It is always advisable to see the doctor if there is any mother facing such problems during their postnatal periods.

Stretch marks are the most observable signs that accompany child birth. However, they often fade away over a period of months to a year or two after giving birth, but one of the major problem is that they don't completely disappear. It is one of the major thing that often give women away, those that intended to keep their child birth secrete.

Diastasis recti is an observable gap that occur between the two sides of the rectus abdominis muscle. It's usually most noticeable right after delivery. In pregnant or postpartum women, the condition is caused by the stretching of the rectus abdominis by the growing uterus. It is more common in women who have given birth several times due to repeated episodes of stretching.
It can be treated by several means but one of the most effective ways is through exercises such as;