How These Animals do Burial Ceremonies will Melt Your Heart 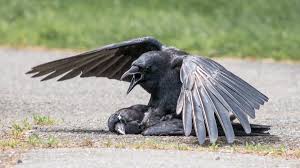 The way animals show intelligence and emotional response towards situations at times is quite incredible. Although we usually call them lower animals, but the way they responds towards some things may leave us in awe. However, evolution has made humans to be more intellectually and emotionally balance than them but that doesn't mean that these creatures are completely dumb and stupid.

The reason we judge them the way we do is because most times we don't pay much attention to them just like we do to our fellow humans. If we start giving these low niggas some attentions to really see how they behave, we will notice that the distance between we and them when it comes to showing character is just minute.

If you really knew how smart, sensitive, and creative these animals are, you will marvel!. Upon seeing the bones or dead body of another elephant, an elephant will stop and investigate the body, even if it was not part of the group. If the deceased elephant is not related to the group, they would touch the body gently with their trunks and cover it with leaves or grass, but if its a member of their family, they would occasionally stay with the body for several days to weeks just to agonize and mourn over it.

Still speaking of intelligence, Magpies are one of the most intelligent animals that exist. If you think humans are the only ones who love using mirrors to observe their pretty faces then you have not come across a Magpies. They are animals that admire themselves as well while starring at the mirror.

They are animals that are self aware but their intelligence goes much more than that. Just like other birds, Magpies interestingly show empathy to others of their own kind and the social rituals they display towards their dead loved ones, leaves a lot of scientist in awe.

Studies have shown that magpies feel a lot of griefs when they lost loved ones and they conduct funerals too. According to a research by Dr. Bekoff of the University of Colorado USA, he studied four magpies that took interest in a magpie corpse and recorded their behavior.

He noticed that one Magpie would approached the corpse, gently and peck at it, then step back and another would do the same. After each of them had finished pecking, they would fly away to come back with a grass and lay it by the corps, then finally they would hold vigil for few seconds before flying away one after the other. This is quite an amazing funeral rituals from these lower animals.

Chimpanzees are quite close to humans so don't be amazed to know how emotional these close fellows can be too.

Take a documented case of Dorothy for example. Dorothy was an elderly Chimpanzee in Sanaga-Yong Chimpanzee Rescue Centre in eastern Cameroon. Everyone working at the center knew that Dorothy was a “prominent figure” among her family of chimps. The day Dorothy passed on was quite the saddest day for the remaining Chimpanzees.

The family of chimps lined up along the enclosure, showing griefs and agonizing over the death of Dorothy. They placed their hands on one each others shoulders, mourning and comforting one another.

Crows are very skeptical when it comes to mourning their deceased. They would surround the corpse, call out to each other, and give the body some extra kinds of attention. They are one of the few animals that investigate the death of their loved ones in other to avoid threats.

Gorillas are another social species that develops strong attachments within their family group. When a family member dies, the primates usually show various signs of agony. They would gently touch and pat a deceased family member and may even lay them to rest after wrapping them with leaves. Mother gorillas have been observed to carry around their dead infants for several day or even weeks just to protect the body against scavengers and when the body start decomposing, they will eventually lay them to rest while still feeling depressed.

Dolphins are extremely very emotional when they loose their close relations. They examining the body of their deceased with their snout and aggressively safeguard it against predators. Mother dolphins have been known to safeguard their dead infants for days to some weeks just to prevent scavengers until their body starts decaying in readiness for floating to the top of the sea.

Giraffes are the world tallest creatures but not minding their heights, they still bend down to pay respect to their dead ones. Various reports have shown that mother giraffes hold vigil for their dead infants just to protect the body for days before finally leaving it. It has also been observed that when a group of giraffes come in contact with their dead fellow, they would stop by to observe the body and mourn it for a while.