'They forced us to pray before raping us, to them we were animals' ISIS rape survivor reveals 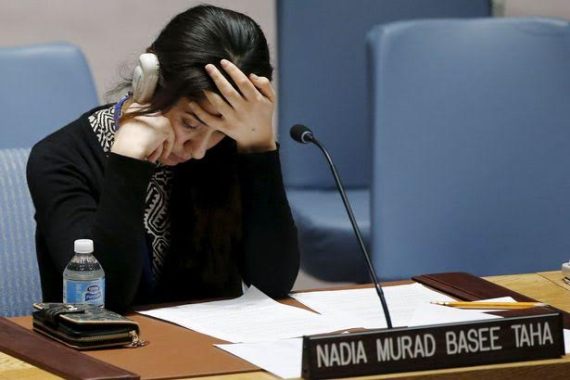 An ISIS rape survivor has revealed the terrible fate she suffered at the hands of the ruthless terrorist organization. Nadia Murad Basee Taha, 21, from the Northern Iraqi town of Sinjar was captured in her home and sold as a sex slave to ISIS militants who considered her as an infidel and did whatever they wished with her body. Speaking at Cairo University in Egypt, she told students.

"When Daesh entered my village, they killed children, the old and young men. The next day, they killed the old women and led the young girls, including me, to Mosul. In Mosul, I saw thousands of Yazidi women where they were distributed to their slave masters. There I saw a huge Daeshi, who wanted to take me. I implored to another man to take me instead when I saw he was smaller. But he turned out later to be one of the worst people I’ve ever seen. The Daesh used to force me and other captives to pray and then rape us. We were not worth the value of animals.

"They raped girls in groups. They did what a mind could not imagine. In their so-called Sharia [Islamic law] courts, they had our names and phone numbers of our slave masters. They would call us whenever they wanted to spend time with us and sell us."

Nadia was brave enough to escape from her so called "owner" and has now made it her point of duty to inform the world especially young girls and youths about the growing threat ISIS poses to the girl child and World Peace.

"I am the victim of terrorism disguised under the cloak of Islam. All these crimes are committed in the name of Islam. I’ve come to the Muslim world to complain and demand an Arab and Islamic stance against Daesh. No religion accepts enslaving women and raping children. We have the right to demand a united global stance because we share others values of humanity."