African Dogs, How Are They Different From Other Breeds? 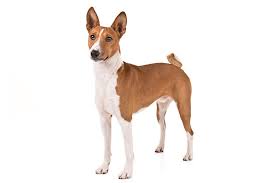 We know different breeds of foreign dogs like, bulldogs, German shepherds, Beagle, Rottweilers, e.t.c, but never cared to know what our local dogs are called.

For your information African local dogs are called Basenji.

The Basenji is a breed of hunting dogs that originated in central Africa. According to DNA analysis based on whole-genome sequences indicate that the domestic dog is a genetically divergent subspecies of the gray wolf

These local dogs, which Europeans identified as a unique breed and called basenji, were prized by locals for their intelligence, courage, speed, and silence. Most Europeans consider independent dogs such as Basenjis more intelligent than obedient breeds because of their ability to recognize which actions benefit them, and which simply please another.

Several attempts were made to bring the breed to England and other European countries, but the earliest imports succumbed to disease. It was not until the 1930s that foundation stock was successfully established in England for this dogs, and then to the United States by animal importer Henry Trefflich. Nearly all the Basenjis in the Western world are descended from these few original imports.