Is He the Next Jay-Jay Okocha of Nigeria? 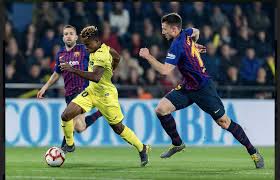 Man-of-the-match in Nigeria’s quarterfinals encounter with South Africa Samuel Chukwueze has expressed his excitement for scoring his first goal for Nigeria at the Africa Cup of Nations (AFCON).
"I couldn’t imagine myself scoring" he said.

Jay Jay Okocha is a legend that no Super eagles player has been able to replace ever since announcing is retirement from national football in 2006, his space in the national team has been void because no one has been able to match up his skills and his impact on the pitch. But however, is like things are beginning to turn around.

Samuel Chukwueze who is 20 years of age, is a very prolific attacker, a fact that nobody would be able to dispute. For every match he has featured for Super Eagles in the African Cup of Nation AFCON, he has been distinctive with his amazing touches, quality passes, and explosive take on in attacks. Not only that his football is entertaining but also he is very intelligent in decision making while on the pitch. Much is expected of him right now i think.

His good football is not just in the super eagles alone, he is also one of the key players of the Spanish Laliga club Villareal and he has had the opportunity of playing against world stars like Lionel Messi, Sergio Ramos, Luiz Suarrez and others. Even in his club side, he is a star and not just in national team alone. We could only hope for him to keep his good works.