Laws You Can See Only In Japan 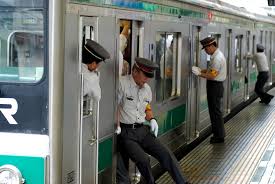 Train transportation in Japan is one of the most patronized transport system in the world. There are thousands to millions of passengers using the railway system on a daily bases and this has brought a lot of advantages ans disadvantages to the system. For this reason in order to make sure that train transports are working effectively, there have been a lot of laws introduced into Japan's railway system just to make sure the system is working smoothly.

See them below. However, these laws may appear strange but they are actually effective.

All train Stations Have Blue Lights to discourage suicide

Japan has one the highest train suicide rate in the world that is why the Japanese train companies are installing blue lights in all train stations just to discourage suicide- because they believed that blue colors have a way of calming down the nerves and making one feel relaxed.

They issue Delay Certificates to passengers

Punctuality is one of the most paramount philosophies of most Japan train stations. They issues delay certificates and apology letters to passengers whenever they are arrived late.

In Japan deer are prone to been killed by trains whenever they go out to lick the iron particles in railways. In order to prevents this most trains have speakers that barks like dogs just to scare them away whenever the train is approaching.

It is believed that train is one of the most patronized transport system in Japan. People tend to use train more in this country and this usually create traffic among people, making every where look jam-packed. For this reason, Japan train stations employs pushers to stuff people into the train.

We said earlier that japan has one of the highest train suicide rates in the world. Whenever there is any casualties like suicide on railways, this normally brings about a delay on train movement which the Japanese stations see as preventing inflow of money. For this reason Train Stations governing bodies have enacted a law to charge relatives of people who commits suicides by train.