The Prostitute Who Is The Most Successful Pirate Ever In History 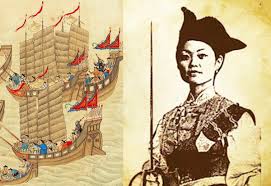 The most successful pirate of ever was a young, attractive female prostitute from China named Ching Shih. She started her working life as a prostitute in the city of Canton. While working as a prostitute she was captured by pirates and later got married to another pirate named Zheng Yi. This was her first step to becoming the most successful pirate in history based on the fact that she commanded the largest crew ever assembled.

She terrorized the China Seas during the Jiaqing Emperor period of the Qing dynasty in the early 19th-century. She commanded over 300 junks (traditional Chinese sailing ships) manned by 20,000 to 40,000 pirates which includes men, women, and even children.

She entered into conflict with major nations, such as the British Empire, the Portuguese Empire, and the Qing dynasty. Many would have expected her to suffer a very brutal death but ironically, she died in 1844 at the age of 69 in her own bed as a free woman surrounded by her family.