Meet Kylie Jenner, The World Youngest Self Made Billionaire 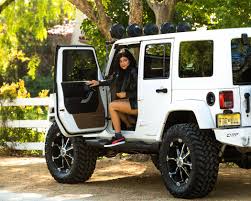 Kylie Kristen Jenner 21 years old, is an American media personality, model, businesswoman, and socialite. She has starred in the reality television series Keeping Up with the Kardashians since 2007 and is the founder and owner of cosmetic company Kylie Cosmetics. She is the world youngest self made billionaire. Lets take a look at her whips!