People That Drew Tattoo On Their Eyes 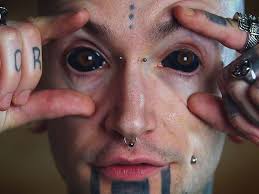 Humans have been getting tattooed ever since we first found a natural pigment and a tool to inject ourselves with it. Tattoos still hold an important place in many cultures around the world. Even for those without any cultural reasons to get them, tattoos are an immensely personal thing.

One tattoo trend that has been gaining traction lately, however, is not just bizarre but is also putting the health of many unknowing people around the world at risk. Known as eyeball tattooing, it’s exactly what it sounds like. They take a needle and inject the eyeball with ink, and it’s as uncomfortable as it looks. While there are safe ways to do it, like going to a surgeon, it’s also being done by unqualified tattoo artists with no surgical experience.

While many people are now getting into it due to the trend that has recently gone viral, cautions should still be observed for those that have this ambition to be inked eyes.