Top Legendary Snipers The World Have Ever Known 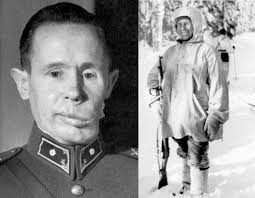 The first real sniper training could be attributed to Russia in the 1930s, however that could also be called elite training of regular battle troops. It was less sniper training and more camouflage and marksmanship of the common soldier.

Germany in World War II was the pioneer in training snipers, and they often picked off U.S. green troops. Russian and Japanese snipers were significant role players as well. Russia was famous for training women and Japan was famous for hiding in tropical rain forests. The U.S. army never trained snipers in peacetime until after the Vietnam War, when snipers proved that they were a battlefield necessity.

Then the twist that ultimately doomed 309 German soldiers. The young Russian next to her was killed, and then "after that, nothing could stop her." She killed two German soldiers that day.

So how did this woman learn to shoot? By joining a shooting club in Kiev at the age of 14. While most little girls are starting to flirt with boys at that age, she was learning how to kill. She even joined the army before women were even accepted.

She killed 187 soldiers at the battle of Odessa, and 257 during the rest of the war. Not to mention she also killed 36 enemy snipers (one of whom already amassed 500 kills.) All of this was after she had already attained her master's degree at the University of Kiev. She later became a historian (probably one of the most badass in history.)

Introducing probably the most famous German sniper of WWII, Josef Allerberger, and his accomplice Matthäus Hetzenauer. This Nazi duo made a significant impact during the war.

Josef was a normal front line soldier until he got injured at the Battle of Stavropol. While he was recuperating, he decided to play around with a captured Soviet Mosin Nagant 91/30 rifle. This practice would lead him to want to practice on real targets, and he did.

He soon went Soviet-hunting and killed 27 Soviet troops before his commanders sent him off to sniper training (German sniper training was the best in WWII). There he learned to hide behind a camouflaged umbrella, all the while shooting whatever he wanted with a German K98.

Matthäus Hetzenauer would eventually be captured, but survived the war and lived until 2004. Josef (Sepp) Allerberger would follow his dad's footsteps and become a carpenter. He was probably one of the most badass carpenters in history. He only recently died in 2010.

College wasn't exciting enough for Ivan, so he dropped out and joined the army.

The mortar team he was conscripted to wasn't exciting enough for him, so he began hunting the enemy in his free time. One by one, German soldiers fell with accurate shots coming from the same Mosin-Nagantrifle. What did the Germans do? Deployed an army of snipers to the area.

What did the Russians do? Well, Ivan's kill total grew at a fast rate and his commanders started noticing. Soon after, they started asking him to train other men too. Ivan began to take men one by one out on missions with him.

The experienced well trained German snipers all failed to take out Ivan and his team of snipers. The result? The Russian 1st Baltic Front had a steep psychological advantage on its German enemy, and fought one of the more decisive campaigns of the war.

All in all, he earned the number two spot on this list by achieving the rank of major (highest of any sniper) and training 250 snipers by himself. Not to mention the extremely impressive kill total of 542.

He was a hero among heroes. Simo Häyhä was 5'3" and a farmer from Finland. He was a killing machine. Over the course of 100 days during the Winter War he sat in trees and behind snow and sniped Russians with iron sights. He preferred iron sights to a scope because he believed the scope exposed him too much. He must have not been exposed at all.

After killing dozens of Soviets, they devised missions just to kill him. They ended up coming so close to him that he would have to spray all of them with his sub-machine gun. He killed 150 of them just with a sub-machine gun. After a couple of failed missions to kill him, they sent in a team of counter snipers. He killed them all. Oh yeah, and this was all in weather that was 20-40 degrees below zero.

So the Soviets decided to artillery strike the hell out of the general vicinity that he was in. Shrapnel from these strikes struck his coat, but that didn't stop him.

Eventually after killing 706 Soviets, a bullet struck Simo in the head.

Did that stop him? No, two weeks later he was out of the hospital despite "half of his face" being blown off. He lived to be 96, dying in 2002.

The legend of "The White Death" is forever immortalized in history. Some of his comrades claim that he killed even more than 706 people. After all, it was probably easy to lose track since he has the most kills of any foot soldier in recorded history.