Facts About Genghis Khan a Great Emperor Of Mongolia 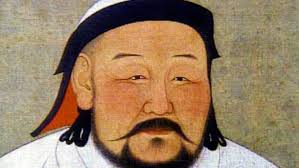 The ‘Universal Ruler’, Genghis Khan is one of history’s most formidable warlords. From humble beginnings in the steppes of Mongolia, he forged one of the largest empires the world has ever seen.

Here are facts about Genghis Khan.

He was not originally called Genghis

Born in c.1162 in a mountainous region of Mongolia, he was named after a rival chief who his father had recently captured: Temujin, which translates as ‘blacksmith’.

Temujin rescued his first wife from a rival clan

In 1178 when he was sixteen years old, Temujin married Börte, who came from a friendly, neighbouring tribe. But Börte was soon kidnapped by a rival Mongolian tribe. Determined to get her back, Temujin launched a daring rescue mission which succeeded. Börte went on to bear Temujin four sons and at least six daughters.

By 1106, Temujin had become the sole ruler of the Mongolian Plains

After many years of fighting Temujin managed to unite the various steppe tribes that inhabited the Plains. The union became known as the Mongols and it was then that Temujin was bestowed with the title “Genghis Khan”, meaning ‘universal ruler’.

With his horde, that consisted mostly of light cavalry archers, Genghis now targeted kingdoms outside Mongolia.

He first subjugated the neighbouring Western Xia kingdom in 1209, before declaring war on the much larger Jin dynasty that at the time controlled much of northern China and Manchuria.

where he gained perhaps his greatest victory

At the battle of Yehuling in 1211, Genghis and his Mongol horde won a crushing victory in which they killed many thousands of Jin soldiers. The entire Jin army was destroyed, paving the way for Genghis’ subjugation of the dynasty.

China was just the beginning for Genghis

After humbling the Jin dynasty, Genghis went to war with the Khwarezmid Empire in present-day Turkmenistan, Uzbekistan, Afghanistan and Iran.

The war erupted after the Khwarezm sultan had murdered some of Genghis Khan’s ambassadors. In response, Genghis unleashed Mongol fury on the Khwarezms, storming city after city. The Sultan died while retreating from Genghis’ horde and the Khwarezmid Empire collapsed.

Genghis had over 500 wives

They bore him many children. Börte, however, remained Genghis’ life companion and only her sons were considered his legitimate successors.

Genghis had much to thank his mother for

Her name was Hoelun and during Genghis’ early life she taught him the importance of unity, especially in Mongolia. Hoelun went on to become one of Genghis’ chief advisers.

When he died in 1227, Genghis left a formidable empire

It stretched from the Caspian Sea to the Sea of Japan – some 13,500,000 km squared. Yet this was only the beginning.

The Mongol Empire became the second largest empire in history

The Mongol Empire continued to grow under Genghis’ successors. At its height in 1279, it stretched from the sea of Japan to eastern Hungary, covering 16% of the world. It remains one of the largest empires the world has ever seen, second only in size to the British Empire.