Boxers vs Briefs -- How Effective are they to Men's Health? 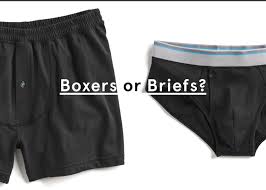 You may have heard that boxers are better than briefs for fertility. There’s certainly some logic behind it – the looser the brief, the more natural the position, and therefore the healthier the testes. But this debate is more complex than that. As the research  is murky on this issue, it’s still quite difficult to see the truth within it.

One of the main accusations against briefs is that their snug fit causes an increase in temperature and as such, they are not ideal when you’re concerned about fertility. A study done by a group of urologists questioned that theory. They measured scrotal temperatures in infertile men wearing boxers and briefs. Some men also switched from one underwear to the other.

More recently, a Harvard study looked at the impact that underwear might have on testicular function. This study took no biological measurements but instead collected big data about men wearing underwear. A group of infertile men were asked about the kind of underwear that they wear (53% boxers) and their sperm counts were checked. Overall, men wearing boxers had sperm counts that were 25% higher than those wearing briefs, bikini’s or jockey shorts.

This might suggest that boxers are better than briefs for fertility – and many news outlets ran with this headline, announcing that the debate had been settled once and for all. But, we shouldn’t be so quick to make that leap.

The researchers themselves acknowledged that their findings can’t be applied to the general population due to limitations of the study. While these types of studies do factor in things like a man’s weight, physical activity, and his daily habits, they have trouble figuring in possibly important biological things like tight-fitting clothes, fevers, illness, or the day-to-day and season-to-season variation in semen quality that we know happens. Perhaps more importantly, all of the men in the study were already infertile – and actual fertility was not measured.

The bottom line is that, fertility itself is really the only outcome that matters here, and currently, there is no study that definitively proves that wearing briefs is a danger.