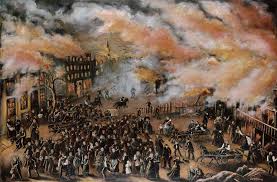 The Chicago Fire of 1871, also called the Great Chicago Fire, burned from October 8 to October 10, 1871, and destroyed thousands of buildings, killed an estimated 300 people and caused an estimated $200 million in damages. Legend has it that a cow kicked over a lantern in a barn and started the fire, but other theories hold that humans or even a meteor might have been responsible for the event that left an area of about four miles long and almost a mile wide of the Windy City, including its business district, in ruins. Following the blaze, reconstruction efforts began quickly and spurred great economic development and population growth.

In October 1871, dry weather and an abundance of wooden buildings, streets and sidewalks made Chicago vulnerable to fire. The Great Chicago Fire began on the night of October 8, in or around a barn located on the property of Patrick and Catherine O’Leary at 137 DeKoven Street on the city’s southwest side. Legend holds that the blaze started when the family’s cow knocked over a lighted lantern; however, Catherine O’Leary denied this charge, and the true cause of the fire has never been determined. What is known is that the fire quickly grew out of control and moved rapidly north and east toward the city center.

The fire burned wildly throughout the following day, finally coming under control on October 10, when rain gave a needed boost to firefighting efforts. The Great Chicago Fire left an estimated 300 people dead and 100,000 others homeless. More than 17,000 structures were destroyed and damages were estimated at $200 million.

The disaster prompted an outbreak of looting and lawlessness. Companies of soldiers were summoned to Chicago and martial law was declared on October 11, ending three days of chaos. Martial law was lifted several weeks later.

The month after the fire, Joseph Medill (1823-99) was elected mayor after promising to institute stricter building and fire codes, a pledge that may have helped him win the office. His victory might also be attributable to the fact that most of the city’s voting records were destroyed in the fire, so it was next to impossible to keep people from voting more than once.

Despite the fire’s devastation, much of Chicago’s physical infrastructure, including its transportation systems, remained intact. Reconstruction efforts began quickly and spurred great economic development and population growth, as architects laid the foundation for a modern city featuring the world’s first skyscrapers. At the time of the fire, Chicago’s population was approximately 324,000; within nine years, there were some 500,000 Chicagoans. By 1890, the city was a major economic and transportation hub with an estimated population of more than 1 million people. (In America, only New York City had a larger population at the time.) In 1893, Chicago hosted the World’s Columbian Exposition, a tourist attraction visited by some 27.5 million people.

Today, the Chicago Fire Department training academy is located on the site of the O’Leary property where the Great Chicago Fire started. In 1997, the Chicago City Council passed a resolution exonerating Catherine O’Leary, an Irish immigrant who died in 1895, and her cow.