The Knights Of Labor 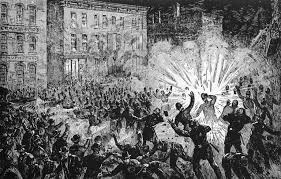 The Knights of Labor began as a secret society of tailors in Philadelphia in 1869. The organization grew slowly during the hard years of the 1870s, but worker militancy rose toward the end of the decade, especially after the great railroad strike of 1877, and the Knights’ membership rose with it. Grand Master Workman Terence V. Powderly took office in 1879, and under his leadership the Knights flourished; by 1886 the group had 700,000 members. Powderly dispensed with the earlier rules of secrecy and committed the organization to seeking the eight-hour day, abolition of child labor, equal pay for equal work, and political reforms including the graduated income tax.

Unlike most trade unions of the day, the Knights’ unions were vertically organized–each included all workers in a given industry, regardless of trade. The Knights were also unusual in accepting workers of all skill levels and both sexes; blacks were included after 1883 (though in segregated locals). On the other hand, the Knights strongly supported the Chinese Exclusion Act of 1882 and the Contract Labor Law of 1885; like many labor leaders at the time, Powderly believed these laws were needed to protect the American work force against competition from underpaid laborers imported by unscrupulous employers.

Powderly believed in boycotts and arbitration, but he opposed strikes. He had only marginal control over the union membership, however, and a successful strike by the Knights against Jay Gould’s southwestern railroad system in 1884 brought a flood of new members. By the beginning of 1886, there were 700,000 Knights of Labor. But when the workers struck the Gould system again in the spring of 1886, they were badly beaten. Meanwhile, other members of the Knights participated–again, over Powderly’s objections–in the general strike that began in Chicago on May 1, 1886.

When a bomb explosion at a workers’ rally in Haymarket Square May 4 triggered a national wave of arrests and repression, labor activism of every kind suffered a setback, and the Knights were particularly–though unfairly–singled out for blame. By 1890, the membership had fallen to 100,000. Although Powderly’s somewhat erratic leadership and the continuing factionalism within the union undoubtedly contributed to the Knights’ demise, the widespread repression of labor unions in the late 1880s was also an important factor