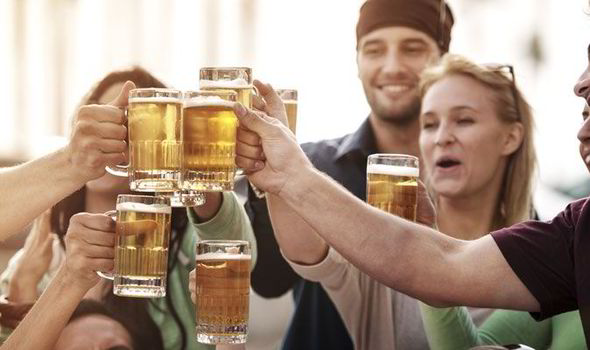 Moderate alcohol consumption may have some substantial health benefits. It should be noted that alcohol consumption and its benefits vary based on an individual's body makeup and type. Moderate alcohol consumption is defined as having up to one drink per day for women and up to two drinks per day for men. This definition is referring to the amount consumed on any single day and is not intended as an average over several days. Now, we've all heard the reasons why alcohol is bad for you, but what about the benefits? Here are ways that drinking alcohol in moderation (when you're of the legal drinking age of course) might benefit your health.
1. It Can Lower Your Risk Of Cardiovascular Disease
Moderate amounts of alcohol raises levels of high-density lipoprotein, HDL, or 'good' cholesterol and higher HDL levels are associated with greater protection against heart disease. Moderate alcohol consumption has also been linked with beneficial changes ranging from better sensitivity to insulin to improvements in factors that influence blood clotting. Such changes would tend to prevent the formation of small blood clots that can block arteries in the heart, neck, and brain, the ultimate cause of many heart attacks and the most common kind of stroke." This finding is applicable to both men and women who have not been previously diagnosed with any type of cardiovascular disease.
2. It Can Lengthen Your Life
Drinking occasionally could add a few years to your life. A study reported that drinking less than four or two drinks per day for men and women respectively could reduce the risk of death by 18 percent. "Little amounts, preferably during meals, this appears to be the right way (to drink alcohol)," said Dr. Giovanni de Gaetano of Catholic University, another author on the study. "This is another feature of the Mediterranean diet, where alcohol, wine above all, is the ideal partner of a dinner or lunch, but that's all: the rest of the day must be absolutely alcohol-free."
3. It Can Improve Your Libido
Contrary to prior beliefs, newer research has found that moderate drinking might actually protect against erectile dysfunction in the same way that drinking red wine might benefit heart disease. In a 2009 study published in the, Journal of Sexual Medicine, researchers found that the chances of erectile dysfunction were reduced by 25 to 30 percent among alcohol drinkers. The lead researcher, Kew-Kim Chew, an epidemiologist at the University of West Australia, conducted the study with 1,770 Australian men. In his study, Chew cautiously noted that he and his team in no way are advising men to hit the bottle, and that further research is needed to accurately connect impotence and alcohol consumption.
4. It Helps Prevent Against the Common Cold
The Department of Psychology at Carnegie Mellon University found that while susceptibility to the common cold was increased by smoking, moderate alcohol consumption led to a decrease in common cold cases for nonsmokers. This study was conducted in 1993 with 391 adults. In 2002, according to the New York Times, Spanish researchers found that by drinking eight to 14 glasses of wine per week, particularly red wine, one could see a 60-percent reduction in the risk of developing a cold. The scientists suspected that this had something to do with the antioxidant properties of wine.
5. It Can Decrease Chances Of Developing Dementia
Moderate drinkers were 23 percent less likely to develop cognitive impairment or Alzheimer's disease and other forms of dementia. Small amounts of alcohol might, in effect, make brain cells more fit. Alcohol in moderate amounts stresses cells and thus toughens them up to cope with major stresses down the road that could cause dementia. We don't recommend that nondrinkers start drinking, but moderate drinking if it is truly moderate can be beneficial.
6. It Can Reduce The Risk Of Gallstones
Drinking two units of alcohol per day can reduce the risk of gallstones by one-third. Study found that those who reported consuming two UK units of alcohol per day had a one-third reduction in their risk of developing gallstones. Researchers emphasized that their findings show the benefits of moderate alcohol intake but stress that excessive alcohol intake can cause health problems.
7. Lowers The Chance Of Diabetes
Healthy adults who drink one to two glasses per day have a decreased chance of developing type 2 diabetes, in comparison to those who don't drink at all. The results of the investigation show that moderate alcohol consumption can play a part in a healthy lifestyle to help reduce the risk of developing diabetes type 2.
Leave a comment...