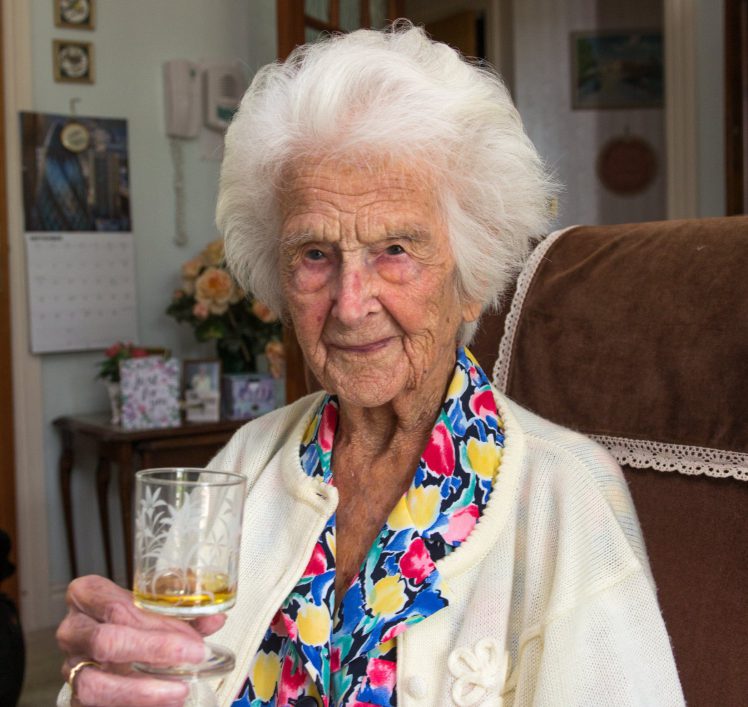 One of the oldest people in the UK has just turned 111, and she claims to owe her amazing longevity to a shot of whiskey each night.

Grace Jones, who has acquired the fitting moniker Amazing Grace, recently celebrated her 111th birthday recently, however she said she doesn't ‘feel any different than I did at 21'.

It's not just 60 years of seeing off a whiskey every night that has kept Grace going into her 12th decade.

Her daughter Dierdre, who is approaching her 80th birthday herself, said of her mother: ‘She's a very positive person and never seems to worry about anything.

‘She's also very lively and interested in everything and everyone. She loved moving around. She's the kind of person who cannot understand why anybody would want to live the quiet life.'

Grace was born in Liverpool in 1906. She was alive when the Titanic sank and was 12 when WW1 ended.

She even shares the year of her birth with artist Samuel Beckett and actress Mary Astor.

Grace is the 6th oldest person in the UK, the oldest being Bessie Cam from Rotherham who is 113.

As well as seeing more than 100 years of British history, including women gaining the vote, five separate monarchs and two world wars, Grace has also moved home 27 times in her life.

She also said the highlight of her life (so far) was her happy marriage to Leonard, who sadly died in 1986.

And what brand of whiskey does Grace favour each night? She usually goes for Teacher's Highland Cream, which started being made in 1884, only 22 years before Grace was born, however occasionally she enjoys a Famous Grouse.