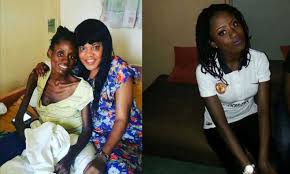 Mayowa Ahmed, the cancer patient who was the beneficiary of the #SaveMayowa fundraising campaign, has died.

Habeeb Odufuye, her cousin, shared the news of her demise on Sunday, through his Twitter page, @Asiwaju_Foye.

"By Allah, in who's hands our lives is, Mayowa Ahmed has left us in this world. We pray that Jannat becomes her home. She tried, we tried but God's will prevailed"Ø, he said in his tweets.

By Allah, in who's hands our lives is, Mayowa Ahmed has left us in this world. We pray that Jannat becomes her home #RipMayowa

She tried, we tried but God's will prevailed #RipMayowa

Mayowa's condition - stage 4 ovarian cancer - prompted Nigerians to rally and pool funds to facilitate her treatment abroad however, the entire process, although successful, ended in controversy.

It was recently revealed in a statement issued by her family that Mayowa had finally travelled to South Africa for treatment.

Mayowa's family had said: "As a family, it was our wish for Mayowa to leave the country on the earliest available flight to start her treatment but due to the much rumoured and alleged scam, we were faced with an overwhelming task of getting her flight documentations ready and missed the earliest scheduled appointment for August 1 in the UAE.

"In the midst of all this, several people and organisations working with us became sceptical and had to cancel appointments, including health care providers.

"But for some well-meaning individuals who were not deterred assisted in activating our back up plan. And with the grace of the Almighty Allah, Mayowa finally left the shores of Nigeria to South Africa last Thursday to start her treatment.

"On behalf of Mayowa, we want to say a very big thank you to everybody for your support with donations, prayers and logistics to facilitate the pursuit of giving Mayowa Ahmed a chance to live.

"To our various employers, we are extremely grateful for the trust and faith you had in us amidst of the allegations. Also the Lagos state police command for their diligent and thorough investigation which reinforced the integrity that the family stands for and was raised by."Ø
Leave a comment...