Some Really Cool Facts about Being Drunk 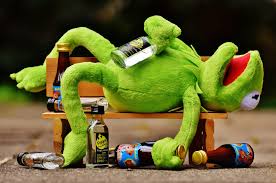 Alcohol usually gets a bad reputation. However, due to its links to health and social troubles, the idea behind drunkenness still remains a heated discussion. While it often gets a bad rap, facts remains that there is a fair balance between the negative and the positive sides of getting high. Even several researches have found that alcohol can be beneficial in a whole lot of ways. If you’ve always wanted to see the other side of yourself, take some booze as you watch yourself do exploit. Lol!
Anyway, there are some fascinating facts about the alcohol. From the surprising role that alcohol plays in surviving traumatic injuries, down to why intoxicated birds slur their songs, below are some really cool facts about being drunk.
The Sober Friend Effect
According to science, sober people make inebriate people feel drunker than they truly are. A UK study suggests that in real life, being surrounded by sober individuals may actually have a sobering effect.
In the study, researchers found that drunken people who were surrounded by other inebriate individuals were more likely to underestimate their own level of drunkenness. But when surrounded by more sober people, drinkers tended to overestimate their own level of drunkenness, the study found.
Your Morals remains the same
As a matter of fact you can easily get away with things when you are drunk than when you are sober.   When a drunk person commits an offence or makes a bad decision, all the blames go to the bottle but when a sober person commit the same atrocity, he is made to take full responsibility for it. Does that mean we lost our morals when drunk? A study conducted in 2019 may actually have the answer.
In a 2019 study, researchers decided to test how alcohol affects our morals. The participants involved in the study were boozed with vodka and their reactions were recorded. Photographs that depict human emotions were brought before them to see and react to. They soon started to respond inappropriately to photographs that depicted human emotions. They liked the sad faces and were irritated by the faces that looked happy -although science has shown before now that drunkenness can affect empathy.
However, when it came to accessing moral values after getting drunk, the study found that alcohol has a little or no part to play. Drunk people know when they do something wrong and alcohol shouldn’t take the blamed.
Drunks Survive More Injuries
This may actually sound counterintuitive but alcohol can help you survive serious injuries. A 2012 Chicago study that involved 190,612 participants who were patients, actually proved this. In the study, the participant’s blood alcohol levels were measured, ranging from when they were sober to when they were heavily intoxicated. According to the result, for same cumbersome reasons, the drunker the patients were upon admission, the more likely they were to survive.
Tipsy Birds Slur Their Songs
When you swim too deeply in the bottle, your words tend to slur and your speech becomes disorganized. This is one of the many ignoble things that alcohol can do to us. However, for a very long time, scientist has wondered if animals too share in this agony, so they decided to study bird’s reactions to alcohol.
In the study, some groups of birds called zebra finches were given juice topped with 6 percent alcohol. The birds developed a blood-alcohol level of .05–.08 percent – the level that can make humans lose focus. Curiously, the drunken finches didn’t sing as much as usual. But when they did, the songs were slurred and often disorganized.
Leave a comment...