Languages With the Highest Number Of Speakers in The World 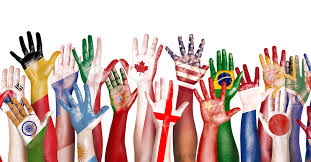 Language is one of the most important aspect of being a living thing especially animals. It is the way through which we communicate. There are no animals on this earth that do not have any method of communication. Although their means of communication may not be as complex as ours but believe me, these little guys have their own languages too. Bacteria are some of the most minute organism in the world yet, they do communicate with each other through a process called quorum sensing.

Language is perhaps the most important function of the human body – it allows us to get sustenance as children, and virtually anything we want as an adult, it permits us many hours of entertainment through literature, radio, music, and movies. On this list, we are going to see some of the most important and most popular languages dominating our world. Lets journey!

Second on this list is the the English language. This language is native to the British and Americans widely spoken by 508 Million population across the globe. It is one of the major language that dominates Europe, Africa, North America, Australia and New Zealand. The British being the original owners of the English language, has played a very vital role in the world civilization both positively and negatively. They had the highest number of colonies around the world including Asia and Africa -i think that could explain why English language is most popular across different territories. Even India and Singapore, has it as an official language.

"We pretty much understand this language at least basically, so no need giving examples".

Hindustani is the primary language of India. Although not very many territories across the globe speaks this language but India being the second most populated nation in the world, actually made this language one of the most spoken. The total number of speakers rages around 497 million population. Although this is quite small when compared to the total population of India -the reason being that there are some other languages spoken in the country aside Hindustani such as Bangali, Kashmiri, including English e.t.c. to mention just a few. I think that could explain the drop in the population of speakers.

Spanish is the another widely spoken language in the world. It is majorly the official language all any South American nation you can think of. Other speakers include central America and South-eastern United States. It is spoken by around 392 million population all over the world most especially South America where it is most concentrated. The Spanish language is native to the Spaniards, originating from Spain. Just the way British dispersed the English language through colonialism, is the same way the Spaniards made larger chunks of South Americans speak the Spanish language.

This is actually a language you would see up to like four consonant sounds starting a word then you will be like, " Oh my gush! what the hell is this"?

Although you may hate on the way the the words are written but you would probably enjoy their pronunciation. This language has a population approximately 277 million speakers, most of which were under the USSR. Countries includes Belarus, Kazakhstan, Ukraine and the major owners Russia etc.

Did you actually see the last letters ending the word? that's what  i was talking about!

Portuguese is a language closed related to Spanish. If you can understand Spanish, you are half way into understanding Portuguese. The language is spoken by around 191 million population allover the world most especially in Brazil, Macau, Angola, Venezuela, Mozambique and it place of origin Portugal. Portuguese was one of the non African language to ever surface in West Africa but they weren't smart enough to establish the language in the territory because if they were, the whole of west Africa wouldn't have been dominated by English and French.

French is often regarded as the most romantic language in the world. I really don't know why...maybe is probably because of the 'French Kiss' we all love during intimacy, or French Fries and wines...what do you think?

French has it origin in France and is spoken in several countries, most of which are in Africa. The French language has 129 million speakers all over the world including Belgium, Canada, and some African countries like Togo, Ivory Coast, Rwanda, Cameroon and Benin Republic etc.