Tall Women Will Feel Happy After Knowing This 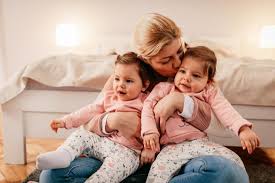 The chances of giving birth to two or more babies at a time are quite slim compare to a single baby. Most couples always have the dream of twinning most especially for the woman. If you ask most couple how much they would love to give birth to twins, you will be shocked at the response you will receive from many. You will actually realize that the only reason most couples wouldn't like the idea of twinning, is because of their state of economy or how buoyant enough they are to cater for two babies at the same time. But if all thing being equal, most women don't mind having twins even if it may look stressful carrying them or catering for them.

While most women would have such a dream that they can't wait for it to come through, research have shown that some women may be favored in this regards while others may not be so lucky. Whether this dream will be a reality or not may have a lot of things to do with the woman's height.

A researcher who specializes in multiple-birth pregnancies has confirmed that taller women are more likely to have twins. This is because taller women have more of an insulin-like growth factor which is linked to height and to the probability of giving birth to twins.

Insulin-like growth factor (IGF) is a protein released by the liver in response to growth hormones. It increases the sensitivity of the ovaries to follicle stimulating hormone, thereby increasing ovulation, thus, it makes a woman release one or more eggs during the period of ovulation.

In a study carried out in 2006 by Dr. Gary Steinman, an obstetrician at Long Island Jewish Medical Center, compared heights of 125 women who had twins and 24 who had triplets to the average height of women. The research found that those who birthed two or more children were on average more than an inch taller than average.

The study also shows that "Any circumstance that affects the amount of available insulin-like growth factor so as to modify the sensitivity of the ovary to follicle-stimulating hormone appears to govern the rate of spontaneous twinning," said Dr. Steinman.

This is actually an accurate study because if you notice, countries with taller women have actually recorded more birth of twin than others with predominantly average height women.

Not limited to that, it was also proved that women who consume a lot dairy products such as milk, are five times more likely to have twins, because Cows on the other hand, like humans, produce the same Insulin-like growth factor IGF in response to growth hormone and release it into the blood, and the IGF makes its way into their milk.

So in a nutshell, if you were a tall woman already, this is just a bonus but if you are average of below, you may want to consider increasing your diary intake just to as well participate in this glory.