The Lungs Of The Earth is On Fire, this will be Very Critical To Humanity -see photos 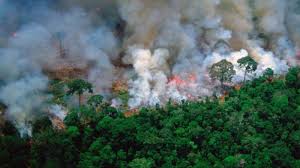 The Amazon forest which is popularly known as the "lungs of the earth" due to it vast amount of trees and oxygen it contribute to the environment, has been on fire for the past two weeks. However, the Brazilian Army has been deployed to help tackle the vicious fires after the nation's government faced mounting international pressure to take more action to tackle them.  The vast stretch of flames has been captured on both NASA and NOAA satellites from space.