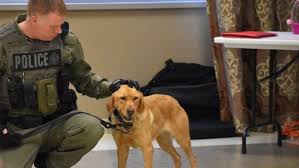 Zoe the police dog is being praised after finding two teens who had been missing for three days.

16-year-old Maya Mirota and Marta Malek who went camping in Ontario’s Algonquin Park, Canada. They were declared missing after failing to meet up with the rest of their group, and authorities were alerted.

Four different canine units were brought in by float planes to assist with the search and rescue. After roughly 90 minutes of search, Zoe, led the emergency team straight to the two missing girls after identifying their scent. They were dehydrated and covered in bug bites but otherwise in good condition.