Mystery About The Darvaza gas crater - The 'Door To Hell' 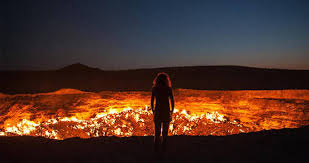 The "Darvaza gas crater" located in Derweze, Turkmenistan, is one of the most mysterious places on earth to visit, it is usually called the "Door to Hell or Gates of Hell". It is a natural gas field that  collapsed into an underground cavern. Geologists during explorations intentionally set it on fire to prevent the spread of methane gas, and it is thought to have been burning continuously since then,1971.

The site was identified by Soviet engineers in 1971. It was originally thought to be a substantial oil field site. The engineers set up a drilling rig and operations to assess the quantity of oil available at the site. Soon after the preliminary survey found a natural gas pocket, the ground beneath the drilling rig and camp collapsed into a wide crater and was buried.

Expecting dangerous releases of poisonous gases from the cavern into nearby towns, the engineers considered it advisable to burn the gas off. It was estimated that the gas would burn out within a few weeks, but it has instead continued to burn for more than four decades until now.

It is a home for tourist that attracts millions of people from all over the world so you can visit if you think you have the adrenaline.