Ancient Sports That Have Gone Into Extinction 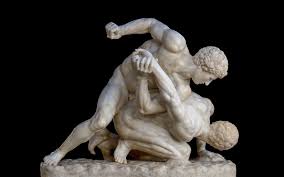 Long before this modern conventional sports like soccer, basketball, and rugby etc, were introduced, there were hundred of sports that have once existed. These games were so interesting that they can pull thousands of spectators from around the world. However, majority of these sports were quite very dangerous that they can pose serious danger to the lives of the participants as well as the viewers and this is why most of them have lost prominence in today's world of sports.

Read further to discover the once prominent and once enjoyed sports that have gone into extinction.

Originating from India is the Club swinging sport. It is a sport that was introduced as a routine exercise for soldiers which aim is to help them develop strength and mobility. It was a game adopted by British and America and was even introduced into the Olympics before it extinction by 1953.

As a popular game in the ancient Roman and Greek empire, is the Chariot Racing which is a game enjoyed during the Roman festival - i guess most of us must have watched this in epic movies. The game was very brutal that the speeding chariots were prone to collision which could result to death of the contestants. It gained popularity in the Olympics until finally going into extinction after the fall of Constantinople and the roman empire.

We must have watched this in movies most especially Game Of Thrones. It was a sport that was mainly contested by armies that were Knights. In this sport whoever that becomes winner, wins a ladies favor by requesting anything from her. This sport gained popularity during the medieval era before finally going into extinction.

This is one of the earliest sports in the history of Olympics around 649-648 BC when it was first introduced. It was a game enjoyed by the ancient Greeks because it portrays strength and techniques. It is a sport that combines boxing and wrestling where the participants fight naked. It is a very dangerous sport that they have to fight to death unless the opponent conceded defeat.