How Do We Choose a Life Partner---What Trait Should we look Out For? 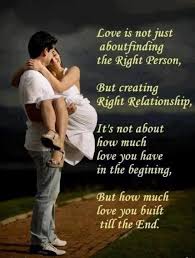 What actually is that thing we need in a partner when looking for one? This is a very big question that most people ask themselves or fail to ask when looking for the Mr Right. We all have fantasies about how we would love our partner to be. But most at times our standard is outrageous and can not be backed up by reality. However, there are actually realistic qualities or characteristics one could choose to see in his future partner.

Most of us seek a partner, for life or at least for a while. But how do we choose? After all, we meet hundreds, even thousands, of people in the course of our daily lives. What makes two people pick one another from among the myriad available candidates? Psychological science has long been trying to answer this question, and with considerable success.

Two main theories have guided scientific thinking on the subject. First is evolutionary theory, which claims that behavioral tendencies, physical characteristics, and personality features that promote our chances to survive and reproduce become, by that virtue, desirable to us.

Likewise, the evolutionary approach predicts that the biological and anatomical differences between men and women will result in different preferences for partner selection. For example, human biology dictates that women need help and protection during pregnancy, and that their fertility is time-limited. Therefore, it makes sense that men who can provide protection will be deemed attractive to women, and that young—and hence fertile—women will be attractive to men. Indeed, studies show that when it comes to long-term relationships, women overall emphasize the importance of status parameters while men find female youth highly attractive.

On the other hand, 'social role theory,’ developed by the American psychologist Alice Eagly, argues that social—rather than biological—processes dictate our social choices. According to this argument, the mate selection rules are dictated by the roles that women and men occupy in society. Thus, people's preferences in the search for a mate are expected to shift as social roles and norms shift. For example, women are attracted to men with power and money because society limits their own ability to gain power and money. If, tomorrow, most positions of power and money go to women, then a man’s status and wealth will matter much less to women, while male beauty, youth, and stamina may come to matter more.

In general, we grow to like those around us and those with whom we have frequent contact. The more time we spend with someone, the greater the chances that we'll like, accept, and fall in love with him or her. Now granted, we all know someone with whom increased interaction causes increased frustration and resentment, but that is the exception that proves the rule. Simple exposure is one reason why many a romance blooms at work or at the university. Daily contact over time turns strangers into friends, and more.

Physical beauty is an important life advantage, and it is of fundamental significance in the mating game. Bottom line: you do not want to spend your life with someone you find physically repellent. Physical attraction, it turns out, obeys the laws of the market: the best goods cost more, and so buyers do not get what they want but what they can afford. Ultimately, the rich drive the Mercedes, the middle class drives the Toyota and the poor ride the bus. Similarly with physical attractiveness, beautiful people end up with others who are very beautiful, average looking with average looking, etc.

Most of us will marry someone who lives within walking or driving distance. We are unlikely to persist in a relationship or get married to someone who’s a transatlantic flight away. The great poet Yehuda Amichai wrote, "Advice for good love: Don't love those from far away. Take for yourself one from nearby. The way a sensible house will take local stones for its building,” and the poet was right. Most of us choose from the nearby selection. Long-distance relationships are more difficult to nurture, and they survive much less often.

The ocean wants the ocean, not the beach, and not the boat. One reason for this preference is that it’s easier for us to communicate, understand, know, and trust someone who speaks our language, gets our culture, shares our values, or believes in our God. The second reason is that loving someone similar to us amounts, psychologically, to killing two birds with one stone: He’s wonderful, and he’s just like me; therefore, I'm wonderful! And who does not want to feel wonderful?

When choosing a partner, we frequently engage in internal negotiations whereby the value of romantic love is pitted against the value of social status and economic security. If the love is strong, we may sacrifice security or economic status. If the potential partner’s status is high, we may compromise regarding the intensity of our romantic feelings.

When choosing a partner, we tend to compromise regarding emotional stability if the potential partner is very attractive physically. Alternatively, we may agree to accept a less attractive partner if they are exceptionally stable and emotionally sound.

We tend to forgive a partner who’s pursuing higher education and a career if they are not interested in having many children. Conversely, we may forgive the limited educational and career achievements of someone who really wants to have children and raise a large family.

Someone of the same religion as us will be seen as an attractive choice even if he or she does not possess a particularly sociable character. A potential partner who’s very sociable by nature will attract us even if they don’t share our religious background.

These four factors operate, independently, in both men and women; but for the first three, significant differences were found between the sexes. In general, women place more importance on socio-economic status than romantic love. Women also prefer emotional stability to attractive appearance, and they prefer intelligence to the desire to have children. Status, emotional stability, and intelligence are less important features for men when they seek a long-term partner. Men emphasize the value of external beauty, youth and physical health, and a desire for children.