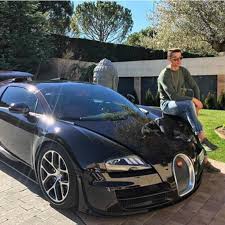 Cristiano Ronaldo has been a source of inspiration and a role model to millions of people allover the world. The soccer legend has actually redefined the history of football with his amazing tactics and prowess. Aside football, he possesses a very amazing body physique which has actually engineered him as one of the most prominent model in the world and all of these things has brought him so much fortunes.

With a net worth of more than $250-$320 million and endorsement deals with plenty of big-name brands, the Portuguese football star has it all. He loves to show off and his knack for displaying flamboyance is not limited to the football pitch only. The exuberant Cristiano Ronaldo car collection will give you a hint about the ways he likes to divulge his wealth.

The Real Madrid superstar is a huge petrolhead at heart. He has a passion for not just any car, but fast and fancy cars and he just loves to flaunt his collection to his fans. Just follow him on Instagram and you will see for yourself!

The dream-like Cristiano Ronaldo car collection that has been adorning his private garage for quite some time includes:

Although Ronaldo has never publicly admitted his admiration for a particular model, his Instagram feed makes his fondness for the custom-made CR7 Bugatti Chiron quite evident. It’s also the most expensive in the collection of Cristiano Ronaldo cars.
It costs more than $4.7 million and what is more impressive that the car is so exclusive that Bugatti Automobiles will build only 500 models. Ronaldo is lucky to secure one featuring his trademark “CR7” insignia.

Chiron is the fastest, powerful, and most exclusive in the Bugatti brand lineup. It is marketed as a deluxe super sports car but you can call it a hypercar because it’s a 261mph top-speed car that can go from zero to 60 in less than 2.5 seconds. With innovative technology, trailblazing design, and performance-oriented features, it could easily be a genre-defining automobile.

The M6 is one of the early cars that he purchased while playing for the Manchester United. It cost him $102,000 when he bought it in 2006. It was a basic model featuring a mighty 5L V-10 engine but Ronaldo could probably get it with a few extra bells and whistles.

With 592 horsepower, The GT Speed produces lots of power on the road, just like its owner rules the football pitch with power and speed. Its top speed is 189 mph and it goes to 60 mph from zero in just 3.4 seconds.

The collection of Cristiano Ronaldo cars might be incomplete without an Aston Martin, the favorite car brand of the dashing 007! The iconic British make cost him $200,000, which is nothing compared to its drool-worthy looks, high-revving V-12 engine, and plenty of horsepowers.

The sports car from the German manufacturer is popular with celebrities all over the world. Ronaldo bought the beautiful, luxurious R8 for $150,000.