Viking Kings and Their Notable Deeds 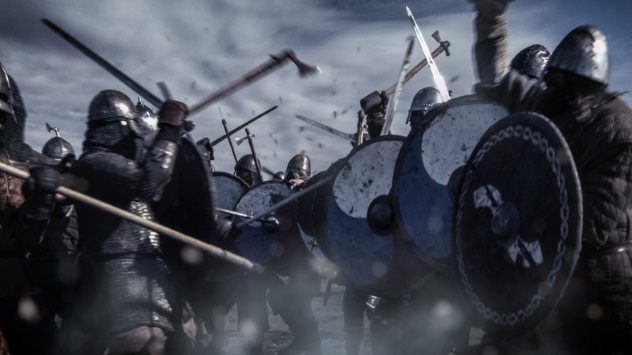 The vikings are known for their regards for reputation. In their eyes, a person’s reputation or deeds were the only thing that survived them long after they were gone, so they loved to celebrate the actions of their ancestors and friends while trying to make a name for themselves personally, whether that be by exploring, conquering and raiding.

Here, we learn about ten Viking kings and their epic deeds.

Sweyn Forkbeard And The Conquest Of England

Sweyn Forkbeard became the first Viking king of all England in 1013, though he only reigned for five weeks before his death—not long enough to even be officially crowned. But it is the reasoning behind his invasion that makes him a truly respectable Viking king. By Sweyn’s time, the Vikings had lived in England for nearly 200 years but had never managed to conquer the entire kingdom.

They ruled the northeastern half of England as the Danelaw until the end of Eric Bloodaxe’s reign in 954, when they were driven out. People of Viking descent continued to live in England, however, and the Viking kings across the sea continued to have an interest in their people. So when the English king ordered the mass slaughter of Vikings living in England in 1002, Sweyn planned his revenge. While he’d been raiding the English coast on and off for a decade or so, now he mustered an invasion force.

They landed in 1003, causing widespread destruction and pillaging much of the country in revenge. Ethelred the Unready was forced to pay Sweyn a ludicrous amount of silver to stop the latter from burning his kingdom. But ten years later, Sweyn was back, this time with an army big enough to seize England.

They landed in Kent and rampaged through the countryside, soon reaching London. The English earls, fearing another drawn-out war and already skeptical of their own king, drove Ethelred into exile and declared Sweyn king of England. While Sweyn’s reign didn’t last long, it did pave the way for another Viking invasion, this one much more permanent.

With Sweyn’s death, his son Cnut was left in charge of his father’s army in England. The English lords, however, chose to bring Ethelred back, and Cnut fled to Denmark. He immediately set about raising a larger army and even asked his brother (and rival), the king of Denmark, for warriors to help him. Poles, Swedes, and Norwegians flocked to his banner, drawn by the promise of loot. Cnut landed in Wessex in 1015 at the head of 10,000 men and laid waste to the country, conquering from Cornwall to Northumbria.

But London remained defiant under the leadership of the newly chosen English king, Edmund Ironside. The armies of the two kings met at the Battle of Assandun (usually accepted to be modern-day Ashington), where Cnut won a close-fought engagement. English resistance crumbled. By 1018, Cnut was also king of Denmark following the death of his brother, and he finally conquered Norway in 1028, after years of conflict with various Scandinavian lords.

Though they’d originally fought against him, the English were remarkably loyal to Cnut during his reign; he spent much of his 20-year tenure putting down rebellions or fighting enemies in his homeland, leaving England to be governed by his allies, and by his death, nearly all the men on his council were English. Cnut became one of the most powerful kings in Europe, meeting with the pope and the emperor of Germany on several occasions and fostering economic links between his three kingdoms.

While his empire broke apart on his death, he seems to have made little effort in his life to see it continue, abandoning Norway to rebels in the final years of his reign and leaving Denmark to his son Harthacnut and England to his other son, Harold Harefoot. The union of the three kingdoms made Cnut the most powerful king in Europe at the time, however, and his descendants would repeatedly try (and fail) to recreate his successes.

Before Cnut and Sweyn, however, someone had to turn Denmark into the strong, centralized state that it had to be to go toe-to-toe with England. This king was Harald Bluetooth, Sweyn’s father and long-reigning king of Denmark. Not all Viking strength came from conquest. Over the course of his 30-year reign, Harald transformed Denmark from a political backwater into a strong medieval state.

Harald’s plans for creating a centralized government are best summed up by his Trelleborg ring forts: fortresses built across Danish territory, centered at the fort at Aarhus, in the geographical center of the region. Each one was built to exact standards, with four gates (each facing one of the compass points), a tall wall and ditch around the outside, and an open courtyard with administrative buildings in the middle.

These would have served as both tax collection points and places for Danish kings to muster their armies, laying the groundwork for the conquests of his son and grandson. The fortresses were all built in locations that were close to the sea, but far enough from it to be safe from sea raids, and alongside Viking land routes, where they would have been both well-connected and highly visible, a powerful symbol of the king’s authority.

Their sites seem to have been meticulously chosen to efficiently defend and control the people of Denmark, which was no doubt at the forefront of Bluetooth’s mind after the history of wars in Norway and his father’s difficult reign. Unfortunately for him, the ultimate threat came from within, when his son Sweyn forcibly deposed him.

Harald Hardrada And The Destruction Of Heidaby

Harald Hardrada (Hard-Ruler) is famous in history for being one of the last Viking kings and for unsuccessfully trying to seize the throne of England by force—losing the crucial Battle of Stamford Bridge in 1066 to Harold Godwinson, which paved the way for William the Conqueror’s ultimate victory.

This battle, however, came at the end of a long and distinguished Viking career which had taken Harald all around the known world, from Norway to Sicily and Palestine, over the course of 30 years. Perhaps his greatest (or worst) feat was the destruction of Heidaby. Heidaby was a Norse town at the base of Jutland with trade connections across the northern world: It rose to prominence in the late 700s and became the most important town in the Western Viking world.

Harald, who was king of Norway at the time, was trying to subdue Denmark and add it to his realm, and he sought to weaken Denmark by raiding its coast. His campaign took him to Heidaby, which refused to willingly submit to him. In response, he drove burning ships into the harbor, setting it alight.

The flames spread rapidly across the whole town. Snorri Sturlason writes that Harald’s men sang: “All Heidaby is burned down! Strangers will ask where stood the town. In our wild humor up it blazed, and Svein looks round him all amazed,” (albeit in Old Norse, of course). The town of Heidaby never recovered and fell from importance. It was finally brought to an end by a Slavic raid in 1066, which wiped it off the map for good.

Sweyn II Of Denmark And The Last Viking Invasion Of England

The death of Harald Hardrada at the Battle of Stamford Bridge in 1066 is usually considered the end of the Viking age, and many people call Hardrada the last Viking king. The truth is hardly ever that simple, however. Following William’s conquest of England, the Godwin family were deposed but not defeated.

They continued to harass the new kingdom from the sea, and in 1069, Sweyn II of Denmark decided to back one of the Anglo-Saxon pretenders.[9] Why he did so is not 100-percent clear, but it may have been related to his lifelong rivalry with Hardrada.

After all, Hardrada had died trying to seize England, so what better way to one-up your rival once and for all than to succeed where he failed? Sweyn was successful, too, seizing a good portion of Northern England and holding it from William, but in true Viking fashion, he was ready to seize the advantage and turned on his Anglo-Saxon ally when William offered to pay him a large sum of money to go back to Denmark; without Sweyn’s support, the rebellion crumbled, and England remained Norman. The Vikings were never able to conquer England again.