Facts About The Woman In 20 Naira note "Ladi Dosei Kwali" 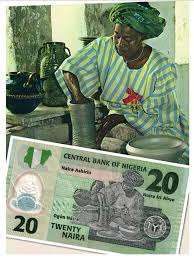 Ladi Kwali was born in the village of Kwali a “Gwari tribe” in a region of present day Abuja, where farming was mainly indigenous to male and pottery indigenous to female. Kwali who grew up in a family in which womenfolk made pots for a living, learnt to make pottery as a child from her aunt.

With the help of a famous English studio potter, Michael Cardew, Kwali came to international prominence for her talents in the 1950s. Cardew, who was appointed to the post of pottery officer in the department of commerce and industry in 1951, launched the Abuja Pottery Training Centre along with Kwali in 1952 and spent the following fifteen years teaching and learning from Nigerian potters.

Kwali would later join the Abuja pottery and become its first female potter. She later became an instructor Ladi’s pots were noted for their beauty of form and decoration. The Emir of Abuja, Alhaji Suleiman Barau acquired several pots made by her. In the palace of the Emir was where Michael Cardew saw Ladi’s work in 1950. Ladi Kwali would later become prominent after this discovery by Cardew Her pots became art objects and were also

- Kwali had been honoured in many ways. In 1962, she was awarded an MBE (Member of the Order of the British Empire). In 1977, Ahmadu Bello University in Zaria awarded her an honorary doctoral degree.

-In 1981, she also received the national honour of the Officer of the Order of the Niger (OON)

- A major street in Abuja is named after her. The street is called Ladi Kwali road.

- The Abuja Pottery was renamed the Ladi Kwali Pottery in the early 1980s.

- Her picture adorned the back of the Nigerian 20 naira note, making her the first Nigerian woman to be on a naira note.