Blue People of Kentucky: Why the Fugate Family Had Blue Skin 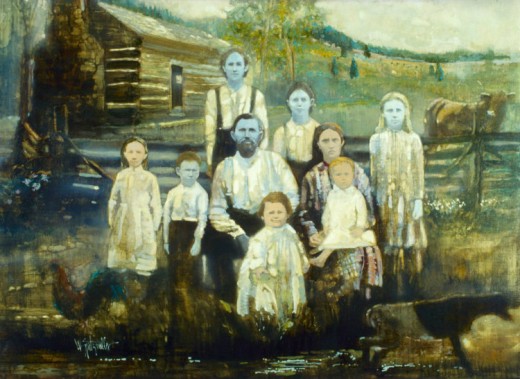 When little Benjamin “Benjy” Stacy was born in a small hospital near Hazard, Kentucky, he was the picture of health. He was also very, very blue. So blue, in fact, that his skin was the deep purple color of a plum. His doctors were alarmed by the sight and immediately sent him by ambulance to a hospital in Lexington, Kentucky.

Little Benjamin was subjected to an exhaustive schedule of tests in an attempt to explain the startling blue color. While he did not appear to be in any distress, doctors began to set up a blood transfusion for the tiny baby. That was when his grandmother stepped in, asking the doctors if they've heard of the Fugates of Troublesome Creek. The boy's father, Alva Stacy, then explained that his paternal grandmother Luna was also blue—and apparently was quite healthy in life.

Benjy’s blue color started to fade a bit over the next few weeks, and as he grew, the only remaining traces of blue coloration were in his lips and nails (the color was particularly noticeable when he became cold). The doctors came to the conclusion that Benjy had inherited a rare gene found in the Appalachians—a gene that turned entire generations of one family blue.

In 1820, French orphan Martin Fugate and his wife Elizabeth Smith moved onto the banks of Troublesome Creek, a beautiful area in Appalachian Kentucky. There is no official record documenting that Martin was actually blue, but he and his wife both carried a recessive gene that gave their son Zachariah Fugate a startling blue color.

Martin and Elizabeth had seven children—four of them were blue. Since the gene causing their blue coloration is recessive, the family had a 25% chance of having a blue child with each pregnancy if Martin and Elizabeth were carriers. If Martin was blue, the odds would have increased to 50% for each child as Martin would have carried two copies of the recessive gene.

Inbreeding was a common occurrence in the rural and isolated Appalachian region. Fugate descendants married other Fugate descendants, concentrating the “blue gene” over generations. The gene found in the Fugate family is from a line of French Huguenots, whose descendants settled in Kentucky, Ireland, and Finland.

Luna Fugate, little Benjy’s great-grandmother, was one of the bluest Fugates known to the Appalachian region. Luna was described as being blue all over, with lips the color of a dark bruise. Despite her alien-like color, she was entirely healthy and had 13 children in her 84-year span of life. What Caused the Blue Skin Color?

The blue skin was caused by a diaphorase deficiency that led to methemoglobinemia, a rare condition that causes elevated levels of methemoglobin, the form of hemoglobin that cannot bind to oxygen.

Scientists were quite intrigued as to the cause of the blue skin (cyanosis) in the Fugate family. In the 1960s, a young hematologist named Madison Cawein traveled to the region with an aim to cure the blue people of their skin color. The doctor hiked through the Appalachian hills, on a mission to find the famous blue people of Kentucky. He finally found a couple—Patrick and Rachel Ritchie—who was willing to participate in his study.

Dr. Cawein started by ruling out any heart or lung condition that could cause the blue tint. He then suspected methemoglobinemia.

Hemoglobin is the protein in the red blood cells that carries oxygen to other cells throughout the body. Each hemoglobin molecule is bound to four iron ions that, in turn, bind to four oxygen molecules. This process is called oxidation and converts the iron ions from their reduced form (Fe2+) to their oxidized form (Fe3+). This is also what gives blood their red color.

What Happens When Hemoglobin Is Damaged?

When hemoglobin is damaged by oxidation, the iron ions remain in their oxidized state and are unable to bind to oxygen. Normally, people have no more than 2% methemoglobin in their blood, thanks to the enzyme diaphorase—more specifically, methemoglobin reductase—that converts methemoglobin back into hemoglobin. However, in certain cases (e.g. enzyme deficiencies, inherited disorders, or exposure to toxins), methemoglobin may continue to build up over time, leading to methemoglobinemia.

What Are the Symptoms of Methemoglobinemia?

Elevated levels aren't usually detrimental—even at 10-20% methemoglobin, when signs of slightly blue skin may be noticed. The blueness increases with increasing methemoglobin levels. At 30%, nausea, difficulty breathing, and an elevated heart rate start to appear. At 55%, people may feel extremely lethargic and go in and out of consciousness. Levels at or above 70% are considered life-threatening and are accompanied by erratic heartbeats and circulatory problems.

Absence of Diaphorase Leads to the Build Up of Methemoglobin

The Ritchies had none of the symptoms of methemoglobinemia—nothing but their discolored skin. Working off of Dr. E. M. Scott's study of similar cases in Alaskan Eskimos and Indians—in which he found decreased levels of the enzyme diaphorase, the enzyme responsible for converting methemoglobin back to hemoglobin—Dr. Cawein performed enzyme assays on additional blood samples from other blue family members. To his amazement, he also found decreased diaphorase. The riddle was solved. This meant that methemoglobin accumulated overtime, making the skin bluer and bluer.

Dr. Cawein published his research in Archives of Internal Medicine in 1964, documenting the study of this family and their congenital methemoglobinemia that was caused by a hereditary diaphorase deficiency.

An Ironic Cure for Blue Skin

To convert the blue methemoglobin back into red hemoglobin, Dr. Cawein suggested the use of a dye called methylene blue. Ironically, this blue dye could change the blue color of the affected blood into a normal red color. Vitamin C (ascorbic acid) is another method of treating the condition.

Of course, it was a tad difficult to convince the blue people of Kentucky that a blue dye would cure the condition. Nevertheless, Patrick and Rachel volunteered to try the treatment. A simple injection of the dye caused a stunning color change. Within minutes, Patrick changed from blue to pink. This, however, was a temporary fix. The dye couldn't fix their enzyme deficiency, so Dr. Cawein left the people with a supply of methylene blue pills to be taken on a continual basis.

How Does the Methylene Blue Treatment Work?

The dye, in its reduced form, is colorless and water-soluble. When added to the blood, it acts as an electron donor, reducing the iron in the blood from Fe3+ to Fe2+ and turning blue as a result. Since it is water-soluble, it is excreted through the urine, which is why some of the older mountain people thought the blue color of their skin was literally “pouring” out of them.

As coal trains and other modern highway connectors began connecting Troublesome Creek with the rest of the nation, people began leaving the area. The gene is no longer concentrated, and the chance of intermingling between two gene carriers is remote. Still, the possibility does exist—as the parents of little Benjy Stacy proved.

What Became of Benjamin Stacy?

The little boy born blue has grown up. He attended Eastern Kentucky University, married, and lives a perfectly typical life in Fairbanks, Alaska. Other than an occasional worried comment from unknowing friends about the color of his lips or fingernails, there is little outward sign of the methemoglobinemia.

There are several types of congenital methemoglobinemia varying in severity of symptoms. In this case, a deficiency in NADH cytochrome b5 reductase (methemoglobin reductase), a diaphorase caused members of the Fugate family to have blue skin.

Type I: This type is limited to the red blood cells and causes a blue color.

Type II: The enzyme is deficient in all tissues, and devastating systemic effects are seen—mental retardation, a small head size, and other central nervous system problems are severe. The child will also present with a blue color.

Type III: The entire blood cell system is affected, including platelets, white blood cells, and red blood cells. Fortunately, this variant does not cause any medical problems (other than a blue skin color).

Type IV: This type only affects the red blood cells and causes a chronic blue color. No other medical problems are associated with Type IV.
The majority of methemoglobinemia cases are caused by an acquired problem (e.g. the person was exposed to oxidizing drugs, toxins, or chemicals). In the case of acquired methemoglobinemia, the patient must be monitored for low blood oxygen levels and anemia since the amount of circulating normal hemoglobin may be reduced to extremely low levels.