Why is lion regarded the king of the jungle and not tiger? 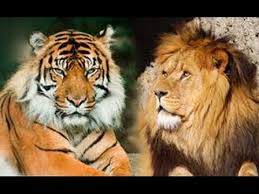 Why lion is considered or said to be as king of the jungle? The question may appear very frivolous and nonsensical as the human beings only 'crowned' the lion as king of the jungle and none of the animals may be even aware of such 'coronation' event. Interestingly, even the 'lion' itself may not know such title has been conferred to 'him'.

When was such coronation event had happened is not known. Why the tiger was not considered for the title of the 'king' despite tiger being the biggest among all the cats. What is so unique or special for 'lion'?

The lion is a very honorable animal and very majestic. The lion is called the king of the jungle not because it is the strongest but because the lion posses kingship abilities that the tigers do not. However research has shown that tigers are much stronger than lions. Being that tigers are the biggest among the cat family, very aggressive and very powerful.

What are the kingship abilities does the lion posses that tigers do not?

1.    A King Should Be Powerful: In the ancient times, strength is one of the leading qualities of a king. A king should be powerful physically and also in battle. And the lion everyone must admit, is a very powerful animal.

2.    A King Must Have Leadership Abilities: The lion is the head of his colony he oversees the affair of the group (lioness and the cubs) ranging from decision making and hunting. When there is a need for food, the lion gives the command for hunting. However the lion rarely goes for hunting but he gives the command to the lioness and others to go for hunting and fetch food. On the other hand, the tiger is a solitary animal that hunts alone they have no one to give command.

3.    The lion is the protector of his territory: Just as it’s the duty of a king to make sure that his community is safe and protected, it is the duty of the lion to protect its territory from intruders. On the other hand since the tiger is a solitary animal, he has no one to actually protect.

4.    Mating duties: It is the duty of the lion to mate with the lioness and have children (cubs) so that the community will expand.

5.    Dethronement and enthronement: Just like a king, whenever the lion fails to deliver his duties effectively, he may be dethroned and replaced.