History of Agriculture In Ancient Asia 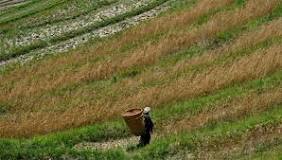 On his way across the Pamirs in search of Buddhist texts (518 CE), the Chinese pilgrim Song Yun noted that the crest of the bare, cold, snowy highlands was commonly believed to be “the middle point of heaven and earth”:

The people of this region use the water of the rivers for irrigating their lands; and when they were told that in the middle country [China] the fields were watered by the rain, they laughed and said, “How could heaven provide enough for all?”

Yet, heaven provided. The vast majority of the population of Asia lives in the regions between the inland mountains and the seas—from Pakistan through India, Myanmar (Burma), Thailand, Laos, Cambodia, Vietnam, and eastern China up to the Bo Hai (Gulf of Chihli) and the offshore island groups of Japan, Malaysia, Indonesia, the Philippines, and Sri Lanka. In the early 21st century some 2.5 billion people were concentrated in just two of these countries, China and India.

From earliest times, agriculture in China has been divided into two major regions by the Qin Mountains, with wheat and millet predominant in the northern realm and rice in the south. At different periods and places, subsidiary native domesticates have included soybeans; tree fruits such as peach and persimmon; hemp (Cannabis sativa); beefsteak plant (Perilla frutescens); rapeseed, or canola (Brassica campestris); tea (Camellia sinensis); water chestnut (Trapa natans); and silk (via sericulture, the raising of silkworms). Domesticated animals have included dogs, pigs, chickens, goats, and cattle.

Although few archaeological data have been recovered from the period from roughly 12,000 to 9000 BP in China, the presence of settlements in Japan at that time suggests that further investigations will reveal analogous developments on the continent. Settled communities are first evident between 9000 and 8000 BP in Inner Mongolia and the Huangtu Gaoyuan (Loess Plateau) drained by the Huang He (Yellow River) system and other rivers such as the Liao in northeastern China. In all these areas, people were moving toward agriculture by 8000 BP.

Although the northern regions are relatively dry today, they were wetter in the past; river valley locations would have further amelioratedregional aridity. Early settlements consisted of groups of pit houses, a form of architecture that provides natural insulation and, given the labour involved in construction, represents a long-term commitment to a particular locale. The Xinglongwa culture in Inner Mongolia began sometime just before 8000 BP and had well-developed stone and pottery technology, broomcorn millet, rectangular houses arranged in rows with a ditch surrounding the community, and burials of people and pigs below some house floors. The immediate predecessor of this culture is not yet known.

At Peiligang (north-central Henan) and Cishan (southern Hebei), numerous oval and rectangular houses are associated with large storage pits. Excavations at Yuchanyan Cave (Hunan) in the early 21st century yielded pottery that was dated 18,300 to 15,430 BP (about 18,000 years old). It was discovered in what was believed to be a Late Paleolithic foragers’ camp and is the oldest pottery discovered to date.

Each domesticated grain has considerably more food value than the wild grain. Hemp also became an important fibre and oil crop, although the archaeological record for the plant is poor. Members of the mustard family, such as Chinese cabbage, were also being domesticated. Some of the earliest domesticated chickens are found here, as are swine. Notably, the East Asian pig was domesticated independently from that domesticated in western Asia and Europe.

As elsewhere, early domesticates were successful additions to an economic system that still included significant input from wild resources. The addition of these resources permitted communities to grow more numerous and populous by 6000 BP. During this period, regional pottery styles were well developed; the distribution of such styles indicates clear zones of habitual interaction over long distances. For instance, people with a sophisticated painted pottery complex known as the Yangshao dominated the Huang He catchment region.

The Yangshao culture is notable for its kiln-fired pottery, which has black symbols and animals painted on a yellowish-orange background. Yangshao sites such as Banpocun (Shaanxi) were occupied for centuries; pit houses, storage pits, kilns, a cemetery, animal pens, and mortars and pestles for grinding grain have all been identified there. Much of Banpocun is surrounded by a moat several metres deep.

Early agricultural communities in southern China were located close to water, because rice could be grown only in seasonally inundated habitats such as lake and marsh margins; paddy fields may have been in use, but rice grown without paddy fields could still be found in China in historical times. In this subtropical monsoonal region, the complex lake systems along the Yangtze basin in south-central China acted as catch basins for floodwaters and wetlands and provided an ideal setting for early rice exploitation.

In this region, rice appears to have been exploited long before the first evidence for its domestication. Rock shelter or cave sites such as Diaotonghuan and Xianrendong, near Dongting Lake, have deposits older than 10,000 BP with evidence of wild rice use. Wild rice was likely growing in the nearby marshy lowlands, now filled in. Rice phytoliths, mainly from chaff, have been found in soils from Diaotunghuan, a rock shelter approximately 60 metres (some 200 feet) above the wet Dayuan basin, making it highly unlikely the phytoliths came into the shelter naturally. The site’s earliest rice phytoliths date well before 10,000 BP and are all from wild rice. By 8000 BP the phytoliths resemble those from domesticated rice.

Archaeological sites that are waterlogged but otherwise stable tend to have excellent organic preservation; such is the case at the Yangtze floodplain village of Bashidang, where a 100-square-metre (1,075-square-foot) area of wet deposits has yielded some 15,000 rice grains. Domesticated rice remains directly dated to 8500 BP are found at Bashidang and at another site, Pengtoushan. These sites belong to what Chinese archaeologists call the Pengtoushan culture, whose radiocarbon dates cluster from 9500 to 8100 BP. The sites each cover about 3 hectares (7.5 acres). Bashidang has some of the earliest defensive walls and ditches found in China.

Much earlier claims for rice domestication have been made, but the evidence is currently weak. One outstanding issue in rice domestication is the origin of the plant’s two prominent subspecies, Oryza sativa japonica and O. sativa indica. Interestingly, the Bashidang rice evinces considerable variation and belongs to neither subspecies. Another site dating to about the same period is Kuahuqiao, located near Hangzhou Bay. The economy at Kuahuqiao was not strictly dependent on agriculture, emphasizing instead a balance of food production, hunting, gathering, and fishing. The site was occupied for only a few centuries, then abandoned because of rising sea levels.

Evidence indicates that people regularly burned the area near the site, possibly to clear the land for rice production. Rice was grown there, but other foods such as acorns seem to have been more important. People also ate peaches and plums as well as prickly water lily (Euryale ferox), water chestnut (Trapa species), and lotus root (Nelumbo nucifera). The dog is common at the site, and people fished and hunted a wide rangeof waterfowl and deer.

The best example of an early community substantially dependent on rice production is Hemudu (6500–5500 BP), a site located on the south side of Hangzhou Bay, not far from Shanghai. Constructed in a wet area, wood-frame houses there were built on pilings to keep floors dry. Dogs, pigs, water buffalo, bottle gourds, water caltrop, and rice were all present. By 4500 BP the Longshan culture, generally viewed as ancestral to state societies in North China, stretched from the Huang He to the Shandong Peninsula. In some areas, Longshan people had added rice to their repertoire of crops.