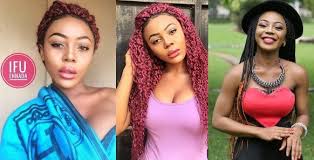 - She had made the claims during the reunion show, much to the surprise of her ex-housemates

- Shortly after the show was aired, she took to her Instagram page to go back on her words

It is safe to say that the BBNaija reunion show is an extention of the Double Wahala edition. The amount of drama that have been witnessed in the show has left many people on social media going wild with excitement. Currently trending on social media is a video clip from the reunion show in which Ifu Ennada claimed she makes up to N5m daily. While Ebuka was surprised, a lot of the ex-housemates weren't buying her claims.

Shortly after the video clip went viral, the reality star and entrepreneur took to her Instagram page to recant her claims. She wrote:"Guys, that 5million naira talk err , no be as e be o, make una forgive me abeg. Sales dey bring better money, but I no know when I talk my future projection.
Leave a comment...