Fitness trends that will help you reach your body goals 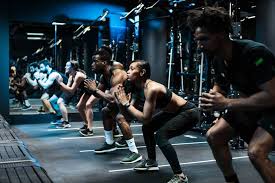 When it comes to fitness, 2019 is promising to reshape the best ways to train. Here are fitness trends that will help you reach your body goals.
According to the  American College of Sports Medicine (ACSM) survey that was published in the  ACSM's Health and Fitness Journal in December 2018 the top 3 fitness treads for 2019 include: wearable technology,group training and High Intensity Interval Training. (HIIT)

The digital gadgets have taken over the training world as much as it has taken over our lives.

Like smart watches, fitness trackers, heart monitors, and more, has ranked in the ACSM's top three trends every year since 2016. The merging of fitness and tech shows no signs of going anywhere, so expect to see even more ways to track and monitor your fitness in 2019.

According to the survey, group classes are designed to be effective, motivational sessions for different fitness levels with instructors having leadership techniques that help individuals in their class achieve fitness goals. This training program have been around for a long time and have appeared as a potential worldwide trend since this survey was originally constructed. However, it was only in 2017 that group exercise training made the top 20, appearing at  number 6, and  number 2 in the 2018 survey.

HIIT took the top spot in 2018 (and in 2014), but despite its small drop, experts still see it playing a big role in the industry this coming year. A HIIT workout, according to ACSM, involves "short bursts of high-intensity bouts of exercise followed by a short period of rest." They're usually 30 minutes or less, though they can be longer. But the main point is to get a quick and very efficient workout.

Combining spirituality and fitness has been a growing trend in the past year. We are seeing the health forward needing more than just a weight loss program but rather something that combines spirituality and getting in shape.

The ancient practice is gaining more popularity, in 2018, yoga has taken on many forms, like power yoga, yogilates, yoga in hot yoga, and suspension yoga.

Because this trend combines both spirituality and fitness we might be seeing more innovate yoga.

Now that we've seen goat yoga, who knows what other forms of yoga the future holds?