SIGNS OF A FAKE FRIEND 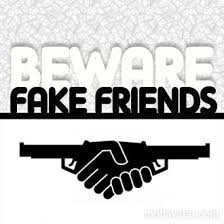 Your Friend Constantly Undermines You
This speaks for itself. If you have a friend that constantly tries to embarrass you and make you look bad in front of anyone or everyone, even after you have told, asked or begged them to stop, this can be a major sign such a friend is fake, even though the friend might claim to 'just be joking'. It's okay for a friend to embarrass you one or two times without being aware, but when it becomes a constant occurrence especially at crucial times to you, you should be careful.

Your Friend Makes Fun of You All the Time
The key word here is 'all the time'. Yes there are friends that will jokingly make fun of you in a harmless way and there are others that will do so to belittle you and lower your self-esteem. Observe to be able to tell the difference.

Your Friend is Mean to You
There is no amount of denial that should prevent you from coming to terms with the fact that your friend is just plain mean to you. A mean friend typically tries to take advantage of you, tries to push you around, isn't considerate of your feelings and constantly tries to belittle you and your accomplishments.

Your Friend is Very Critical of You
If your friend is so critical of your mistakes, chewing you out for even the smallest and pettiest mistakes, it's another sign that such a friend might be fake, especially if the friend constantly excuses their own mistakes while making a big deal out of yours.

Your Friend Ignores You Often
This involves your friend ignoring what you say, your presence, failing to introduce you when necessary (even when their attention is brought to the fact that they haven't) and basically just acting like you're unimportant, irrelevant or like they have no idea whatsoever of who you are. If this occurs frequently, you should think twice about being this person's friend.
Leave a comment...