Photos show a girl kissing a man who looks like President Zuma, claims he is her 'Sugar daddy' 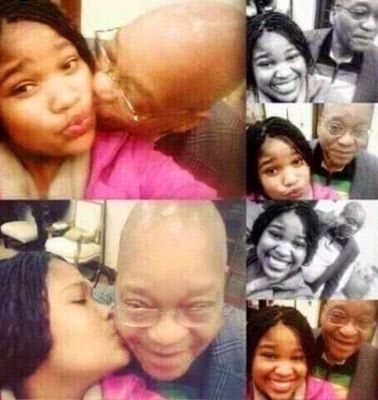 The South African Presidency say they will look into  pictures circulating on social media that shows a young woman kissing a man who appears to be President Jacob Zuma. The pictures were circulated on social media on Tuesday and Wednesday.

"We will check the matter," Presidency spokesperson Bongani Ngqulunga said.

A 19-year-old woman called Lindokuhle Dlamini posted a series of selfies of herself with the man who could be SA president on Tuesday. She captioned it: "He is not just a blesser, we are in love and I am grateful for all that he has done for me, much love. Xo xo."

A blesser, or sugar daddy, is an older man who gives a younger woman money or gifts in exchange for sex. The Facebook page where the selfies purporting to show the pair kissing was posted has been deleted. Some media outlets said they had been contacted by readers to say the woman is actually Zuma's daughter. The Presidency indicated on Wednesday that it would investigate the claims before commenting
Leave a comment...