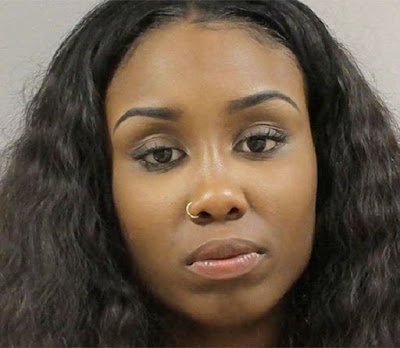 A Nashville, Tennessee woman was arrested on Wednesday June 15th for the illegal use of her mouth to rob an unsuspecting victim. Police say 25 year old Jonisia Morrisis distracted a man by giving him oral sex then robbed him while his pants were literally around his ankles. She allegedly snatched the man's debit card while she performed oral sex on him inside of a parked car. After the cut is what the arrest report says;

While performing the act, the defendant removed the victims wallet from his pants pocket that was around his ankles, removed the debit card that was used at the gas station to buy fuel and other items, conceal it under the passenger seat, close the victims wallet and place it back into the victims pants pocket.
Central Detectives were notifed and responded to the scene. Under Miranda, the defendant admitted involvement in other cases involving debit card thefts by identifying herself in the photos that were obtained from other business.

Jonisa was not charged with prostitution, and there is no evidence that she was engaged in prostitution – just robbery