US and Russian jets clash over Syria 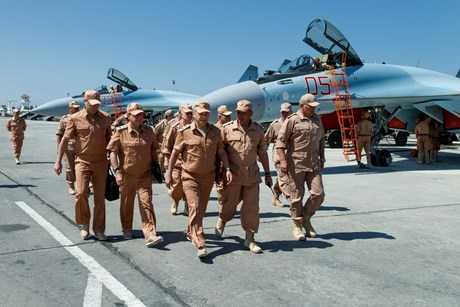 U.S. and Russian fighter jets bloodlessly tangled in the air over Syria on June 16 as the American pilots tried and failed to stop the Russians from bombing U.S.-backed rebels in southern Syria near the border with Jordan.

The aerial close encounter underscores just how chaotic Syria's skies have become as Russia and the U.S.-led coalition work at cross-purposes, each dropping bombs in support of separate factions in the five-year-old civil war.

The near-clash also highlights the escalating risk of American and Russian forces actually coming to blows over Syria, potentially sparking a much wider  conflict between the world's leading nuclear powers.

The incident began when at least two twin-engine Su-34 bombers, some of Moscow's most advanced warplanes, struck what the Pentagon described as a  ōborder garrisonöØhousing around 200 U.S.-supported rebels in At Tanf on the Syrian side of the Syria-Jordan border.

The rebels had been ōconducting counter-ISIL operations in the area,öØ the Pentagon stated on June 18, using an alternative acronym for ISIS.

The United States and its allies in Syria clearly did not expect the air strike. The rebels in At Tanf are party to a shaky ceasefire agreement between rebel forces and the regime of Syrian president Bashar Al AssadŚand, by extension, the Russian military contingent backing Al Assad. The Los Angeles Times reported that Russian planes had not previously been active over At Tanf.

The Su-34s' initial strike wounded, and perhaps killed, some of the rebels in At Tanf.

The U.S. Navy scrambled F/A-18 fighters to intercept the Russians, the Los Angeles Times reported. The Navy has deployed two aircraft carriers to the region for strikes on ISIS. As the F/A-18s approached the Su-34s, officials with U.S. Central CommandŚwhich oversees America's wars in the Middle East and AfghanistanŚused a special hotline to contact their Russian counterparts directing Russia's own intervention in Syria.

Arriving over At Tanf, the American pilots apparently spoke directly to the Russian aviators. ōPilots CAN communicate with one another on a communications channel set up to avoid air accidents,öØ Central Command confirmed in a statement to The Daily Beast.

Washington and Moscow had established the hotline as part of a so-called ōSafety of Flight Memorandum of UnderstandingöØ that the two governments signed in October specifically in order to avoid the kind of aerial confrontation that occurred over Syria last week.

With the American jets flying close enough to visually identify the Su-34s, the Russians departed the air space over At Tanf. Some time shortly thereafter, the F/A-18s ran low on fuel and left the area in order to link up with an aerial tanker. That's when the Su-34s reportedly returned to At Tanf Śand bombed the rebels again.

According to the Los Angeles Times, the second strike killed first-responders assisting survivors of the first bombing run.

ōDepartment officials expressed strong concerns about the attack on the coalition-supported counter-ISIL forces at the At Tanf garrison, which included forces that are participants in the cessation of hostilities in Syria, and emphasized that those concerns would be addressed through ongoing diplomatic discussions on the cessation of hostilities,öØ Defense Department spokesman Peter Cook explained in a statement.

Russian Defense Ministry spokesman Igor Konashenkov confirmed, via the country's state-owned media, that the teleconference took placeŚbut he did not specify the results of the ōextraordinaryöØ meeting.

Russian warplanes had previously  shadowedplanes belonging to the U.S.-led coalition over Syria, but the coalition always described the Russians' behavior as ōprofessional.öØ By contrast, in April Russian Su-24 bombers repeatedly buzzedthe U.S. Navy warship USS Donald Cook while the vessel sailed in international waters in the Black Sea. A Pentagon spokesman called the Russians' actions in that incident ōprovocative and unprofessional.öØ

The Kremlin should be keenly aware of the potential for unwantedŚand potentially destabilizingŚbloodshed that exists in the air over Syria. In November, a Russian Su-24 bomber flying a mission over Syria strayed over the Syria-Turkey border into TurkeyŚand a Turkish F-16 fighter promptly shot it down.

The two Russian crew members ejected. One flier died when Syrian rebels on the ground opened fire on his parachute. Russian, Syrian and Iranian forces launched a complex rescue mission that ultimately retrieved the surviving pilot. One Russian marine died and a helicopter was destroyed during that operation.

The fallout from the November incident continues, with Russia and Turkey exchanging threatsŚand Moscow imposing economic sanctions on Ankarra including limits on some food imports to Russia from Turkey.

It's not clear how close the U.S. fighters came to attacking and potentially shooting down the Su-34s over At Tanf. Central Command declined to say what the rules of engagement are for American pilots flying over Syria. ōROE are actually specifics that we don't get into,öØ Central Command said in a statement.