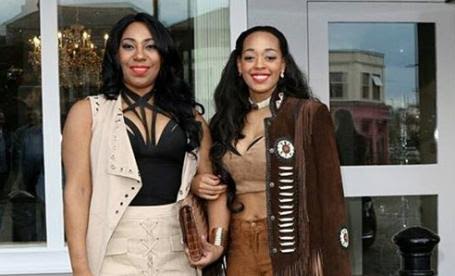 Imani Evans and her mother, Sue were allegedly racially abused and rejected on the doorsteps of swanky London venue, The Voice reports.
The 23-year-old media personality and natural hair blogger, claims door staff insulted her trademark mane and referred to her and her mother Sue as "coloureds". The pair, known professionally as Mother And Daughter Duo, told The Voice of how their press team had secured them an invite to the launch of the Sony Xperia X on May 18.

On arrival, they say they were turned away and told that the venue was at full capacity only to watch other partygoers welcomed in. While on the doorsteps of the Soho venue, 100 Wardour Street, the pair requested to speak to someone in management who had confirmed their attendance.
"We asked her to radio one of her colleagues who knew we was coming and she said into the radio, 'I've got two black girls with me...' and then walked off so we couldn't hear if she was talking to anyone or not. She came back and said 'Sorry there's nothing we can do'," Imani wrote on social media.
The mother-daughter duo who frequent press events and have a number of high-profile friends were met in the line by a friend, TayTay Starhz who is a member of emerging boyband Franklin Lake. When he heard what happened, Starhz attempted to bring the pair through as his guests along with his two friends.
"Shockingly all three of them were stamped and allowed in despite them being 'full to capacity' less than 2 MINUTES ago,"Ø Imani said. "We then reached our hands out expecting to get stamped also and then they said 'Sorry we are full!' So then I said, 'How can you be full when you just let my three friends in?' She then stuttered and changed her story. She said, 'You aren't on the list', which was a blatant lie because we 100 per cent were and why wouldn't she say that in the first place?"
Imani claims that door staff sniggered and continued to laugh and insists that she overheard one member of staff say they would not be letting any "coloureds in"Ø all while mocking her natural afro hairstyle.
According to representatives for the pair, their treatment wasn't too dissimilar to a number of ethnic minority individuals who were scheduled to attend the event for the tech giant's latest product.
The PR company responsible for coordinating the night,, Citizen PR has since release a short statement responding to the allegations amidst mounting pressure from social media.
"A client event that Citizen hosted last week in London couldn't accommodate everyone that wanted to attend, resulting in a number of people being turned away. Two of those people claimed that race was involved in this decision. We took this allegation very seriously and immediately launched an investigation with our staff and suppliers to confirm details of what happened at the event. Now that our investigation is complete we're confident our team acted fairly and professionally. Further, we are confident race had nothing to do with it as we don't stand for that and it simply wouldn't be tolerated. That said, we're deeply sorry for their disappointment. It has not been our team's intent to make anyone feel excluded nor ignored in the aftermath as we fully investigated the matter."
Both Sue and Imani have slammed the apology as insincere and are committed to ensuring the get a sit down with the company and their client Sony.
"How can they claim to have conducted an investigation with only one side of the story? They never contacted us to ask us anything and of course the staff are going to say whatever to cover their backs. We won't be taking this. This trauma has been a nightmare. I haven't been called 'Coloured' since I was 10 years old," added 47-year-old Sue.