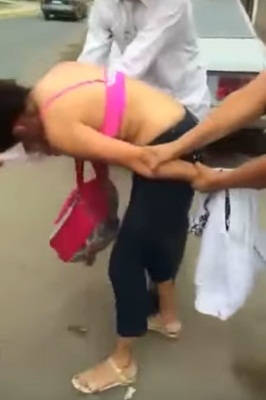 A Colombian woman was severely dealt with after she tried to kidnap a four month old baby at knifepoint as she stepped off a bus in the northern Chilean city of Antofagasta.

As the child's mother screamed, she got the attention of other passengers, joined by several commuters, who then chased after the kidnapper before tackling her to the ground, and apprehending her until police arrived.


The footage taken by a passer-by showed the suspect, down to just a bra with blood streaming from a wound to her head being kicked and pulled by the hair.

Footage showed one of the women involved in the citizen's arrest holding the alleged criminal by the hair and trying to bring her to the ground with a karate kick to her knee while a male helper wrenched her left arm behind her back
She was also clutching part of a torn and bloodied T-shirt to her face which she was reportedly caught trying to change into hidden between  two parked cars in a bid to avoid being identified.

Police in the northern Chilean city of Antofagasta where the drama took place confirmed the immigrant, named locally as Deisi Caviedes Ardila, had been arrested and was facing a kidnap charge.
Her alleged victim, named only as Silvana, revealed in a chilling account of her close escape how her attacker had stabbed her as she walked home from the bus with her two children before threatening her six-year-old boy with the knife and telling her: "Give me the baby or I'll kill your son."Ě

"I fell to the floor when she stabbed me in my right arm. I have cuts to my back and I only tried to defend my children.

She threatened my six-year-old son with the knife, saying that if I didn't let go of my baby girl that she'd kill him. She grabbed hold of my neck shouting all the time, 'Give me the little girl or I'll kill you.

"I know now why she wanted my baby girl but I'm not going to say. I don't know how to explain what I felt at that moment."Ě

The drama occurred around 4pm local time on Tuesday in the northern part of the port city of Antofagasta, about 700 miles north of the Chilean capital Santiago.

"The Chilean woman suffered cuts to several parts of her body and a wound to her arm as a result of the struggle. The Colombian woman briefly had the baby in her possession but tried to flee the scene after seeing passers-by come to the aid of her alleged victim. They finally managed to capture her and handed her over to police when they arrived."Ě

The Colombian woman was remanded in prison yesterday after appearing before a judge accused of kidnap and wounding. Local reports said she was carrying a rucksack with baby clothes and disposable nappies inside when she was arrested.

Investigators are also said to have found a message on her phone to a contact she had called Amor - 'Love' in Spanish - which said: "Love, I'm bringing you the baby."Ě

"I would have given her a tremendous beating like they do in Colombia with people who rob and steal. How sad they leave their country to rob and kidnap people."Ě

"I'm from Colombia and I say to my Chilean brothers, 'Why didn't they kill her?